I admit it.  This film will probably only be liked by peeps who actually watch MST3K for the movie.  I'm one of those. Still, it is always nice to see the combination of a horror film and an oater.  The Old West is really a perfect setting for vampires...and especially vampire vixens.  That is what we have today as we look at 1965's "The Devil's Mistress," directed by Orville Wanzer. 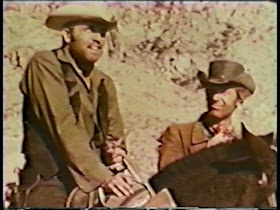 Four cowboys are on the run after pulling off a deadly heist.  Will (Oren Williams) leads the quartet which features the clean cut kid Frank (Robert Gregory) and the evil duo of Joe (Douglas Warren) and Charlie (Wes Moreland).  They flee through Apache territory and must be low key so as not to be noticed by those Indians.  The cowboys come across a macabre cabin in a valley and approach.  Will is hesitant as it looks lifeless.  They are greeted by the weird puritan-like figure Jeroboam (Arthur Resley).  He invites them in for a meal.  His beautiful but mute daughter, Leah (Joan Stapleton) serves three of the men.  Will, spooked by the cabin and the duo that lives there, does not enter.  The three others have a too long and very gratuitous eating scene featuring bad manners, slurping, and burps. 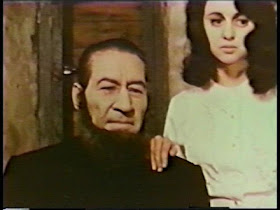 The evil cowboys kill Jeroboam and rape Leah.  Joe and Charlie abduct Leah and catch up to Will and Frank.  Uh oh...Leah's turn.  Charlie will make Leah suck face with him and have his lifeforce sucked out.  Now Leah is on the warpath and the other three have no idea what is going on.  Leah turns on the seduction and tries to suck more face and swap a lot of spit with the other cowboys.  If they give in to her hypnotic beauty, it will be at their peril.  Uh oh...sucking lifeforce out of men is not Leah's only anti-social behavior...as many of you guys may have found out from your ex-wives. 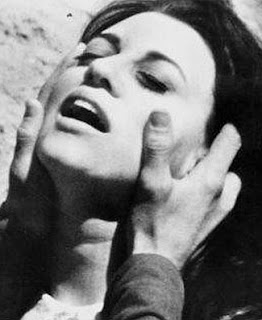 Will any of the cowboys survive the seductive and homicidal tendencies of their new vampire friend?  Does Leah have one of the cowboys in mind for her mate?  How many men reading this have had their lifeforces sucked out of them by a sultry babe?  A fable about the evils that beautiful women can do to men?  A vampire horror story set in the Old West?  Either way, this film has some creepy scenes and plots and finishes with quite a bang.  See "The Devil's Mistress" today and never return to the clean cut "Bonanza" episodes on the western channel on satellite TV.