Woke-ism is the new Puritanism.  Just like the religious zealots of the 17th century, the woke-masters of today will soon meet their reckoning.  Feminine beauty seems to be a target of Puritanism and woke-ism.  Today, ugly men are winning beauty pageants which used to be for beautiful females.  This is not sustainable and today we see woke-ism getting pounded and shunned...good!  So let us look at a piece of Euro-trash from France in which sultry Euro-babes get shredded by a Puritanical cult which objects to beautiful women.  Today we look at 1987's "Maniac Killer" (known on Tubi as "Mania Killer"), directed by Andrea Bianchi. 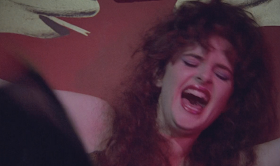 Loose Parisian women are being abducted by a weird cult.  Gondrand (Robert Ginty) is wealthy castle owner who has a torture chamber/temple in his dungeon, the Fixer Upper suggestion of a bonus room was rejected.  As our film begins, his henchman abducts nightclub hostess Rosalee (Isabelle Rochard).  She'll be chained up, stripped, fondled, whipped, burned, and humiliated.  Okay, talk about being miscast, enter Dr. Osborne (Chuck Connors).  He was expelled from America for conducting fatal experiments on beautiful women (he must have worked for the CDC). Now he is doing his experiments in Paris.  Also enter Count Silvano (Bo Svenson).  At his party he catches his wife, the beautiful Countess Silvano (Paulina Adrian) sucking face with Gondrand. The Count has Gondrand thrown out. 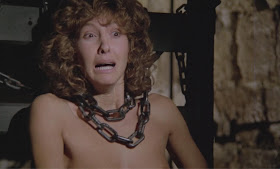 The torture continues and Rosalee continues to draw Gondrand's wrath.  Oh yes, Gondrand uses the beautiful Lysia (Suzanne Andrews) to do the whipping.  Lysia seems to get off on whipping and scalding other beautiful women.  The cult believes that beautiful women are Satan's tools and must repent, confess, and have their beauty marred (they must have majored in Feminist Studies at an American university).  Lysia and Gondrand seem to get off on marring the Euro-babes.  Now Gondrand acts on his anger and abducts Countess Silvano.  The Euro-babe is also strung up in the torture chamber and Lysia can't wait to whip her.  But wait!  How about our mad scientist?  Osborne is on the run and just might, in very ironic fashion, be able to help the Countess. 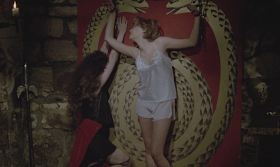