I know what you're thinking.  I can hear your thoughts.  You desperately desire a movie with a sultry redhead who is insane, who strips nude, and sometime dons purple hair, and kills in very erotic ways.  While some desire stupid superhero films...you are a reader of this blog...you want the nutsoid redhead.  Today we have Liz Claire's magnum opus.  Yep...she plays the aforementioned redhead.  Warning...this one does cross the line a few times.  If you pay real close attention, it will cross the line a lot.  If you have the nerve, today we will look at 2022's "Lady Hyde," directed by Jason Rudy. 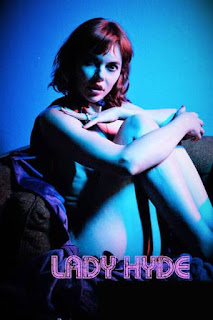 Jane (Clare) is a sultry and mostly nude, wife of Dr. Graham (Rudy).  She loves having sex with him...you'll see.  Graham has developed a vaccine for COVID 19 but since he doesn't work for Big Pharma, his colleagues strip him of his credentials and destroy his lab.  Distraught, Graham commits suicide as Jane is nude and asleep in bed.  Oh yes, Jane?  Nutsoid.  Major league anger issues because of being sexually traumatized as a child.  She has learned to keep her vicious anger inside but when her husband dies because of his colleagues actions...she lets it all out.  The babe strips, or dons erotic undies, and starts her mission of revenge. 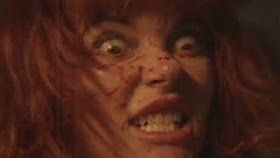 The deaths, murders, actually are steamy...and bloody.  Jane will work to seduce her prey, often with nudity or kinky underwear...even the female doctors.  My favorite death scene concerned a professional wrestling role play with heavy lesbian tones...you will see.  I won't say too much, but the voices of rage inside her head haunt Jane during her spree.  I also won't tell you about Dr. Graham's corpse and what Jane does to it.  By the way, there is a detective looking into all these crimes played by Ryan Gingery.  Kudos to Jason Rudy for having enough guts to utter some truths about COVID 19 deaths that all other filmmakers avoid mentioning.  You'll see. 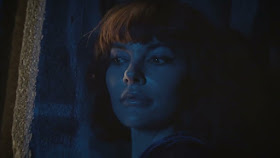 Will Jane complete her mission of revenge and murder every scientist responsible for her husband's suicide?  If she does murder all the scientists, will the voices of rage subside and let her live a normal life?  Is the portrayal of the science community in this film a blunt metaphor for the U.S. science community's handling of the COVID 19 episode over the past couple of years?  Erotic and vicious, this film will hit you strongly.  Liz Clare's performance is sultry and horrific, and you will see her in your mind long after this film ends.  See "Lady Hyde" and it is all right if you don't mention the film in polite company.