Nothing beats a women in prison exploitation film.  Okay, throw in zombies and maybe that will beat it.  Sure, throw in warfare and bombings, big snakes, bottomless pits, nubile secret agents in tight catsuits, torture machines, vicious lesbian sex...yeah, all that is in this film.  It is a brutal film that many will claim is in bad taste and goes too far.  Fine...those peeps can stop reading now.  For those of you who love your exploitation/horror bloody and carnal...2018's "Amazon Hot Box," directed by James Bickert, is for you. 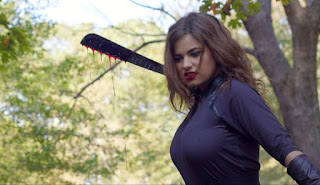 As our film begins a trio of babes is being brought to a South American island female prison. Yes! Penny (Kelsey Carlisle) is a clean cut coed abducted as she studied the environment in the Amazon. Now the babes are brought to a prison where Inga (Ellie Church) is the warden.  Inga dresses in a Nazi uniform and has skin tight latex pants.  The three new girls will be lesbian raped and beaten by the other inmates who are led by Val (Tristan Risk).  Now Inga seeks to torture them to figure if any are American secret agents.  Oh yes, a top-secret U.S. agency, Kill Squad 13, sends Agent Sixx (Jordan Phipps) to infiltrate the prison, rescue Agent 5 (Samara Scott), and destroy it. 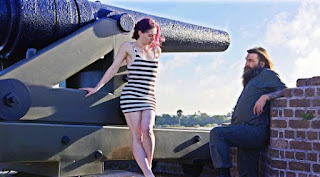 Inga is up to no good.  With the help of a mad-scientist and a midget (Aaron Beelner), she turns the country's former rulers into flesh eating zombies.  These ghouls are imprisoned there too.  Also, a torture machine has been developed that is designed to keep the inmate alive while inflicting pain and mutilation. Through every minute of this fine epic, babes are either raped or shredded.  Argent Sixx makes her move, looking really good in her tight catsuit.  After Sixx shreds everyone she meets on the way to the prison, the prison people get the drop on her.  Now Inga's zombies, of course, get out, and carnage will rule. 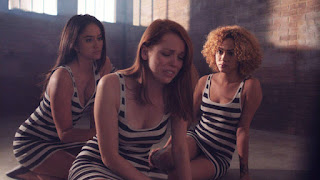 The beautiful will die often and with so much gore in this one.  Exploitation to the max.  This one is a tribute to those early 1970s drive-in classics.  Will the sultry Agent Sixx make this country proud?  Will the evil but sultry Inga maintain rule on the island nation, the prison, and her zombies?  Will any babe be left alive as the end credits roll?  Carnage, deviant sex, and blood splatter will rule the day in "Amazon Hot Box," see it if you dare.