Spider in the Attic, Femmes vs the Arachnids

After this plot gets underway, there is one male in this film.  He's completely worthless.  Okay, granted, most men are.  Fortunately, he will be first to go.  This leaves a bunch of females left to make some of the worst decisions ever put on film.  For example, when the mansion is found to be teeming with monster spiders, thousands of them, the fairer sex decides that the creatures are not a threat and to remain in the web infested structure.  Don't ask.  Still, 2021's "Spider in the Attic," directed by Scott Jeffrey, is an icky creature feature worth a look. 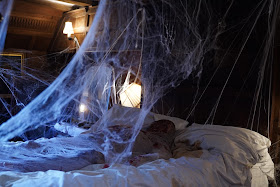 A mad scientist, Dr. Zizerman (Chris Cordell) revives some Nazi experiments on creating mutations by fiddling with genes.  God bless him!  It works and now he has created monster spiders.  The things get out of control and drink him dry in his sleep.  Also, a failing TV producer, Linda (Nicola Wright) has been given an ultimatum...produce a successful show or be fired.  She's sad and will get sadder as she heads home to her worthless daughters.  Belle (Chelsea Greenwood) is nine months pregnant out of wedlock by Daniel the Worthless (Clint Gordon).  Also waiting for her is Lucy (Sarah Alexandra Marks), a soldier babe.  She's unhappy in the army and wants to leave it to pout.  Still, she is quite the babe, and probably a good reason why we are losing the war on terror.

The loser daughters tell Linda she needs to do a crime show in which she actually solves a crime.  Brilliant.  Now all these peeps, and the TV bosses head to an old mansion in Kent to do a story on the above mentioned mad scientist.  They arrive and find their subject infested with spiders and monster spiders climbing all about the mansion.  Leave?  No!  Stay awhile and wait for Belle to go into labor.  Brilliant.  The spiders will have fun, and nutrition, with the women.  Lucy the babe soldier will demonstrate why England's military is a joke.  The spiders will get more aggressive and Belle will go into labor.  Icky crawly cinema, indeed.  Then the ending...you will cherish the ending. 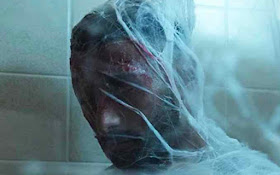 Is this the first movie when we cheer for the Nazi experiments?  Will Linda and her bosses be able to put together a reality show worth while?  Is Lucy symbolic of most British soldiers, and wouldn't she be happier as a naughty stewardess?  Surely a creature feature type film.  CGI spiders may not be everyone's cup of tea but are better than CGI Kate Winslet.  Enjoy a Friday night creature feature and see "Spider in the Attic."