Warriors of the Apocalypse, Babes vs. Zombies and Men

After World War 3, not everything has changed. Men are still pigs! Even the zombies are men...and dead pigs. To be a babe in an apocalyptic wasteland will have hazards that are...well...similar to the hazards babes have now. Hence 2009's "Warriors of the Apocalypse," shot in Erie, Pennsylvania by Len Kabasinski. With great choreographed fight scenes (Kabasinski is an MMA fighter) and leather and fishnet clad beauties, we have another great film containing much gratuity, cheesecake, beefcake, and fighting. 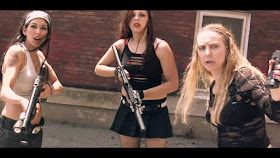 World War 3 has ended...and the wastelands are dotted with a few surviving tribes and a lot of flesh eating zombies. Three vixens led by Spring (Pamela Sutch) and accompanied by Luca (Darian Caine) and Vic (Amara Arielle Offhaus) are put upon by men seeking to rape and enslavement. They pull a fast one and raid the compound and engage in a bloody gun battle and vicious hand-to-hand combat. They win and abscond with a lot of guns including a Gatling gun and Carrie (Renee Porada). Carrie is another blonde babe who recognizes her chances are better with the three vixens than the men pigs! The three also free Harris (Brian Anthony). Harris is quite a hunk...and not a pig. 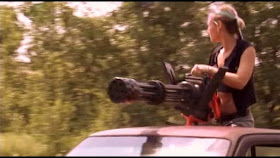 Harris agrees to lead the four babes into the city. The city is run by dictator Rollins (Debbie D). This tyrant likes to skinny dip with handguns...really. Harris desires to kill Rollins as this fiend murdered his family. Now our four gals and one hunk are pursued by the Seattle Seahawks (Kabasinski, Brian Heffron, Deanna Vusalle, etc). Yes...I said the Seattle Seahawks. Led by Largent, the Seahwks want to slaughter the renegade babes...fishnets and all. The babes (half BDSM half Goth) are quite capable and have a Gatling gun now. Heads will be blown off, zombies will eat a lot of flesh...and perhaps the Oakland Raiders are also in pursuit. 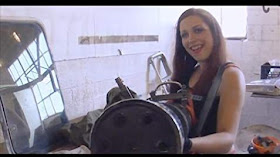 Will our four babes and one hunk find happiness in the city, or will they get cut down by an inconsistent offense and a defense plagued by stupid penalties? Why does leather and fishnets seem so right as female accessories during the apocalypse? Has there ever been a bad movie that has utilized a Gatling gun? The cast is great looking giving this film  high beefcake and cheesecake ratings. For another great epic not to be discussed at book club meetings, or church...enjoy "Warriors of the Apocalypse."
Christopher Zisi at 8:06 AM
Share