Firecracker, Fighting and Loving in the Philippines

I guess we all have our 'travel to southeast Asia and frolic' stories. A bar fight here, a drug gang there, a prostitution ring here, a back-alley casino there...and even a fight-to-the-death story. A right of passage that tops any fraternity or sorority hazing, indeed. Hence from Cirio H. Santiago ( the man who brought us "Wheels of Fire") we have 1981's "Firecracker." 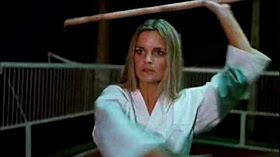 Pretty Bonny (Carolyn Smith) is murdered in Manila shortly after she uncovers a vicious drug ring. This drug ring also runs an illegal joint which features wagering on martial arts fights to the death. Looking for her sister, the sultry Susanna (Jillian Kesner) arrives. The tall blonde PE major from UCLA and black belt doesn't quite blend and immediately two thugs follow her to her hotel room. Clad in white lingerie, Susanna disposes of her tormentors. Now she hits the streets of Manila asking about her sister...big mistake. Susanna is directed to the aforementioned fight club. There she meets hunk Chuck (Darby Hinton). Chuck falls in love with the California blonde and urges the club to allow her to compete. 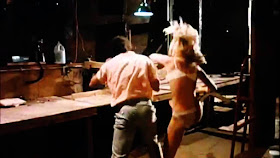 Meanwhile Erik (Ken Metcalfe) is suspicious of Susanna as he also controls a large drug cartel in Manila. Chuck vouches for her not knowing Susanna is suspicious that he may have been involved in her sister's disappearance. Uh oh...Bonny does show up dead and Susanna finds out that Chuck killed her. So what does she do? Right! She goes to Chuck's place and allows him to subject her to deviant sex with daggers...really. Susanna will be chased again and the bad guys manage to cut all her clothes off before she fights back and kills them. Now Susanna is ready...she tells Erik that she wants to fight to the death at the illegal club...and guess who she wants to fight? 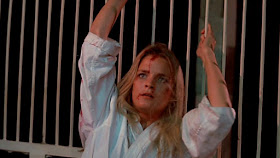 Will Susanna avenge the death of her sister and if so will she do it clothed or naked? Can Chuck's very satisfying performance in bed with Susanna temper her anger toward him for killing pretty Bonny? Will the naked martial arts action of Susanna catch on here in the States? This is a fun, gratuitous, and surprisingly gory tale of girl-shreds-cartel story. From the Philippines, enjoy "Firecracker."
Christopher Zisi at 8:12 AM
Share