All you filmmakers who read this blog can relate. Yep, its probably happened to you dozens of times. You try to film a low-budget horror film in an abandoned cemetery and a low budget genetically enhanced Tasmanian Devil shows up and eats your playboy playmate actress. Don't you hate when that happens? Hence 2006's "Cemetery Gates," which stars that guy from "Phantasm"...Reggie Bannister. 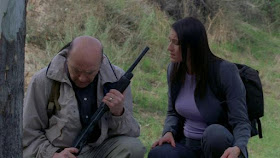 Two mad scientists, Belmont (Reggie Bannister) and the sultry Christine (Aime Wolf) have created a monster...a genetically enhanced Tasmanian Devil. The beast is the size of a bear and is all homicidal. Not knowing this, two eco-activists break into the lab to free the lab animals...this won't go well. They free the fiend and as thanks, the fiend eats them (I know, a metaphor for life). The thing is now loose in the woods as Belmont's son, Hunter (Peter Stickles) brings a film crew to an abandoned cemetery to shoot a low budget zombie film. With him is the pretty Kym (Nicole DuPort) and playmate August (Kristen Novak). Two actors (Chris Finch and Kyle Evans) are also there. 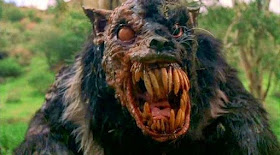 As the filming starts, August does anything she can to strip nude, have pre-marital sex, and smoke marijuana. The fiend? Its working its way to the cemetery eating everyone it meets. As the monster disembowels poor schmucks, Kym and Hunter fall in love and kiss a lot. Now the thing has reached the cemetery and Belmont and Christine are hot on its tail. The toothy menace seems unstoppable and now has smelled cast and crew and it is hungry. 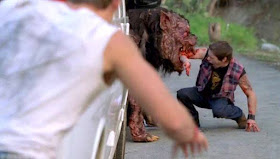 Does playmate August have any shot at surviving in this film? Will Kym and Hunter continue to fall in love as the toothy menace eats their crew? Will our mad scientists be able to offer any help in saving the playmate and others in the abandoned cemetery? This is a gory one and the blood spurts all over the place. Arms and legs will fly, intestines will be yanked out, and heads will be crushed. The actors and actresses offer great beefcake and cheesecake and our playmate delivers the gratuity. For a bloody monster flick, enjoy "Cemetery Gates," directed by Roy Knyrim.
Christopher Zisi at 8:12 AM
Share