The Night Crew, Vampire Babe South of the Border

We've been screaming for it for years...a film about a Chinese stripper who relocates to Mexico and becomes the vampire bride of Danny Trejo. Yes! In what could've been a Paul Rodriguez or Quentin Tarantino film, 2015's "The Night Crew" is so satisfying on so many levels. Yep...a sultry vampire babe and a bunch of hunks...and a couple more beauties. Throw in a vicious drug cartel, a lot of machine gun fights, and even some eroticism...enough said. 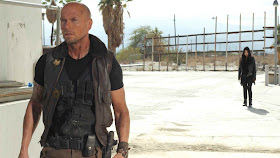 There is probably a great backstory but as our film begins Chinese stripper Mae (Chasty Ballesteros) is plying her trade in a cheap establishment outside Tijuana. Uh oh, cartel boss Aguilar (Trejo) wants her back. As Mae gets rough on some customers who try to paw her, Aguilar's men make a move to re-capture her. They almost succeed...except there is a warrant for her in the States and a team of bounty hunters headed by Wade (Luke Goss) draw down on the cartel thugs and take Mae. Outside the dark dingy strip club, the Mexican sun shines bright...uh oh, the sunlight makes Mae deathly ill. Wade treats Mae like a lady, something she isn't used to...this ticks off one of his team members, the beautiful Rose (Luciana Faulhaber). Rose and Mae will have some confrontations and it appears Mae would either like to eat her literally...or figuratively.

Uh oh, Aguilar, who is deathly sick during the day and perks up at nightfall, sends his henchmen in pursuit. They chase Wade's team to an abandoned Mexican motel where Mae perks up...nightfall, right, you're catching on. Dozens of cartel thugs with machine-guns arrive and a major fight erupts. Mae and Rose continue feuding and all is looking hopeless for the dwindling bounty hunter team. Now its time for Mae to reveal a few surprises. Mae is no fan of mortals but when she sees Wade caring about his men (and Rose), and also promise Mae that he will die before handing her back to Aguilar, she is touched and chooses sides, which won't bode well for the cartel thugs. 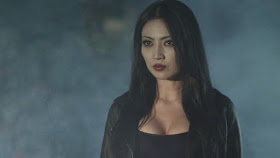