Actually, more precisely, motorcycle babe vs. sea monster, on an oil rig! A gem from South Korea featuring a sultry and tough-as-nails heroine and a toothy, slimy, invincible beast from 10,000 feet. Hence 2011's "Sector 7." Ji-won Ha, the Korean beauty who plays the heroin, and her character in this film, is actually the inspiration of a character I created in my upcoming novel "Ghosts of Brisbane." More on that later in 2019. 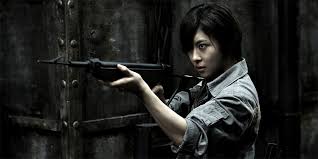 In 1985 a weird diving accident to repair a drill 10,000 feet below the surface kills Hae-joon's (Ha) dad. Present day, Hae-joon is part of the crew on an oil rig. She is tough, beautiful, swings from derricks, races motorcycles, and always looks really good. The rig is going to be shut down...no oil. Uh oh, after Hae-joon's uncle arrives, oil is mysteriously found...and something finds them. At first, jubilation. Guess what! There is a sultry geneticist on board the rig (Ye-ryeon Cha). Is it just because she is really good looking? Nope. Whatever she is breeding in her lab...well, apparently it gets out. The sultry geneticist will be killed (very sad) and she is only the first. 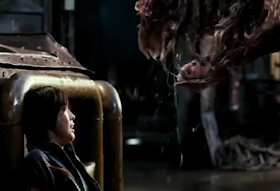 The creature, starts going through crewmen like crap through a goose. Hae-joon and the other survivors are chased through the cavernous rig and because of her uncle (Han-wi Lee) learns of vulnerabilities of the beast. Wait...how did he know? The thing is laying a ton of eggs and is getting meaner. Uh oh...we find out the uncle didn't return to the rig to find oil...but to find something else. Hae-joon will lose many friends and now its personal. With her motorcycle (standard equipment on an oil rig) she will undertake an unlikely venture to save humanity and exert some revenge. 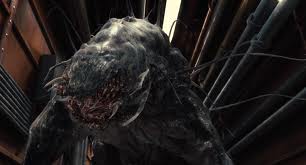 What were those secret experiments of the beautiful geneticist in the secret lab on the ill-fated rig? Will our motorcycle babe be able to fend off and then destroy the sea monster? What exactly happened in 1985 that has caused this war-at-sea? This is an action-packed "Die Hard" type monster film. Ji-won Ha is on the screen constantly and plays to the camera well. Think of her when you read about Miss Ha in the upcoming novel "Ghosts of Brisbane."
Christopher Zisi at 8:00 AM
Share