Bigfoot country...right! Certainly not dating country...or brains country. Okay, many of you won't like this film, 2017's "Bigfoot Country," but...well...I did! Yeah, there are a lot of flaws with this one...unless you take it as a whole. No spoilers, but the very ending was deep and merits thought. As the final credits roll, you might want to have a conversation with yourself starting with, " ...what just happened?" 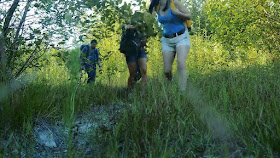 Two hunks and two babes head on a hike through the British Columbia forest. Bryce (Hans Potter) has emerged as the bloke we want to see get picked apart by Sasquatch first. Bryce's crude behavior wins him the favor of babe Carly (Brooke Walker). Everything about Brooke says "...I will die first in horrible fashion." Then there is the very pretty Kiera (Kiana Passmore) who looks like a great candidate for 'final-girl.' Then there's Andy...major league hunk...too shy to let Kiera know he is hot for her. The four make it through the woods with the smoothness of a junior high school dance. As Bryce continues to annoy, Carly searches for pre-marital sex, and Andy and Kiera figure out that men and women get together and...well...you know...a monster begins stalking them. 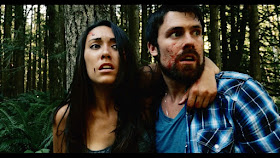 At first the big hairy thing is curious, but when Bryce pulls a boneheaded move to annoy it, the hunt begins...or does it? At no point do we believe our quartet have any kind of chance at survival. As the monster gets closer and puts hands on the human intruders, our humans act...with the intelligence of a dead mackerel. Then irony rears its ugly head...and it is uglier than an angry Sasquatch.  Blood will flow and tortuous demises await at least some of our human cast members. 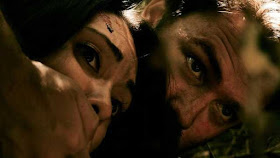 Will Bigfoot do away with all four of the humans? Is Bigfoot really the enemy which our quartet need to worry most over? Will Andy get a clue and engage in pre-marital sex with Kiera before Sasquatch does? If you choose to watch this film, hang in their through the very end. The last shot says so much and will be quite thought provoking. Enjoy "Bigfoot Country," a film directed by Jason Mills.
Christopher Zisi at 8:35 AM
Share