Okay...there I go again. A cheap and gratuitous attempt to boost the readership of this blog. Just string a couple of provocative words together and every deviant in the Americas, Asia, and Europe click on my posting. But seriously...what kind of loser would choose the words 'lesbian' and 'necrophilia' to complete the task? After all, no films out there are about lesbian necrophilia...or are there? Hence 1974's drive-in epic..."Symptoms." 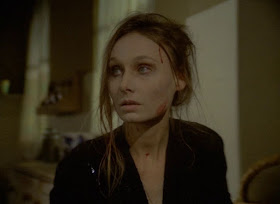 She's nuts! Helen (Angela Pleasance, a spitting image of her dad) needs companionship while she convalesces. Convalesces from what? It is never made clear but a pretty good guess is that she went totally nutsoid. Pretty writer, and friend of Helen, Anne (Lorna Heilbron) accompanies the nut-case to her country estate. The two friends get what they want. Anne has a quiet place to write (probably cheap romance novels), and Helen gets a friend to keep her company. Uh oh...where's Cora (Marie-Paule Mailleux)? Cora had this job before Anne, and she and Helen were close, at least in Helen's mind they were. 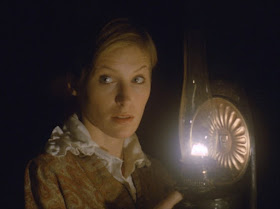 The weirdness starts. Bodies get pulled out of a nearby lake by a weird caretaker. Then Helen kisses and caresses Anne. Then Anne is awoken by sounds of Helen having passionate sex in the bedroom next door. Anne also has an inkling someone else is in the house. As Helen keeps emanating sounds of sexual passion, we get indications that Cora is her sex partner...but why is she hiding from Anne? No spoilers here, but it is obvious that director Jose Ramon Larraz was heavily influenced by Alfred Hitchcock's "Psycho." The murders explode and one wonders why Anne has really been brought to the house by the nutsoid Helen. 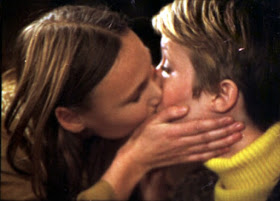 Euro-trash may be the moniker for "Symptoms" which is unfortunate because the intention was to create an artsy-fartsy horror film. Unfortunately, throw lesbianism and necrophilia into the plot and then you have a drive-in crowd as your audience. Where is Cora? Is she dead, or Helen's lover...or both? What will Anne's fate be? Is Helen as bonkers as Norman Bates was? Not for everyone...like lesbian necrophilia could be for everyone...but fans of obscure and deviant horror may enjoy "Symptoms."
Christopher Zisi at 7:45 AM
Share