From Germany we have the definitive film ever made about the plight of the Nazis toward the end of World War 2. Okay, maybe that is a slight exaggeration. We do have a monster movie though that includes the classic line, "Its a G** D***ed f***ed up Nazi monster!" True poetry. This is one of those rare films that we actually hope everyone in it dies a horrible death. From David Bruckner and Jens Nier, let us dive into 2013's "Iron Wolf."

The war isn't going well so mad Nazi scientist, Dr. Muller (Urs Remond), comes up with a brilliant idea. He splices werewolf genes with German Shepherd genes and creates a werewolf, who dresses in an SS uniform, and only kills Russians and people who don't worship Hitler. Why didn't they think of that in 1938? Fortunately they didn't and before they can release it on the Eastern Front, the Russians destroy the lab. 65 years later, Punk Rocker Spike Jones (Dominik Starck) and his crew arrive. They plan a reunion concert (NO!!!!!!!) on the site of the ruined lab. They all hate Nazis and find Nazi paraphernalia and either piss on it, vomit on it, or burn it. 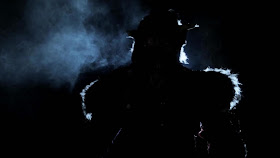 Uh oh, Spike accidentally opens a door which allows the werewolf to escape. The fiend can't be killed and survived in its cell. Fortunately for Spike's GF Jersey (Carolina Rath), he had pre-marital sex with her first. The wolf kills Spike and goes on a rampage. Jersey then finds Spike's brother, Leon (Roland Freitag)...who might be a Fascist, and seeks to have pre-marital sex with him. Now the wolf goes through Spike's crew like crap through a goose. Uh oh again...Jersey is scratched (all us horror film fans know what that means). As the fiend, still clad in a SS uniform, rids Germany of pacifist punk rockers, Leon and Jersey figure out how to kill a werewolf.

Will Jersey and Leon be able to kill the Nazi werewolf or will the Hitler era fiend go through Angela Merkel's Germany like crap through a goose? Will Germany's punk rock scene take a major hit from our hairy friend? Is Jersey destined to become a she-wolf, or is that pretty standard for female punk rock groupies? "Iron Wolf" is a much maligned werewolf flick, but it does leave us a question we can't help asking ourselves, "is Europe really better off having Angela Merkel run the European Union?"
Christopher Zisi at 8:02 AM
Share