Flight 666, Red Eye into the Paranormal

You ever notice that flight attendants strut onto airplanes wearing heels (at least three inches)? Yep, but magically, when the flight commences the heels are gone in favor of flat bottoms. Not in the movies, however. In films, the heels stay on. Our stewardess in much peril today is Alice, played by Liz Fenning. Not only does she keep her heels on, but her uniform is a bit too tight for comfort on a six-hour 'red-eye' from coast-to-coast. Clad in high heels, a tight skirt, even tighter blouse, she'll deal with unruly passengers, disgusting (maggot-infested) in-flight meals, and angry ghosts. 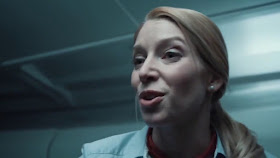 As our film begins Pan US Air flight 57 is headed to New York and is engulfed in a storm. Its a bad one and there's no shaking it. The passengers and crew are being tossed about and Alice is doing everything her training has taught her to keep order. Uh oh, Mr. Peck (Justin Hoffmeister) thinks he saw something otherworldly on the wing and he's spooked...panicked, actually. Air Marshal Thad (Jose Rosete) restrains him. Pretty Alice tries to calm the not-yet-panicked passengers but when she serves a maggot infested salad, well, morale heads south. Uh oh, now Alice may have seen something out the window and pretty passengers Danika (Clarissa Thibeaux) and Anna (Renee Willett) have encounters with a menacing ghost in the cabin's lavatory which brings them...well, you'll see. 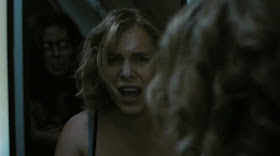 The storm gets worse and everyone on the plane is unhinged except the sultry stewardess, Alice. Whatever the ghost wants, it is not happy it doesn't have the full attention of the passengers and crew. Possession, weird noises, and the arrival of more menacing specters further dampen the mood of the NYC bound passengers. As Alice and the passengers put two and two together, they have to admit to themselves that something paranormal is going on. They also figure out the ghosts desire them to do something...but what? As Alice in her tight stewardess get-up and the passengers get tossed around some more, the haunted onslaught increases. 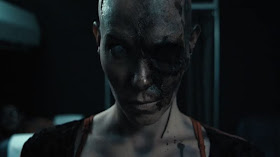 Why are the ghosts aboard Pan US Air flight 57, and what do they want the mortals to do? Will Alice find love amid the turmoil and turbulence, and is her impractical footwear selection a conduit for the paranormal? Are the passengers and Alice in danger from more than the ghosts and storm? This is a nice standard ghost story set at 36,000 feet. The cast provides a lot of beefcake and cheesecake and next time you get stuck on a domestic leg with homely stewardesses...remember Alice from "Flight 666." Oh, by the way, this is film is from The Asylum and directed by Rob Pallatina.
Christopher Zisi at 7:41 AM
Share