You gotta like the protagonist in this thriller. He's Chase Walker! Who is Chase Walker and what does he do? He is a shark hunter...not an auditor or a non-essential government employee. He is a womanizer, not some metro-sexual who shows his vulnerability. His gig is that he shows up at beaches, and when a bikini babe is about to be eaten by a shark...he dives in, kills the shark, and has wild pre-marital sex with the bikini babe. Okay, I know, we all have those summers in our youth when we did that exact same thing, but it is nice to see it in the movies. 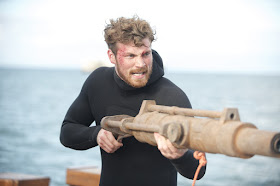 Chase (Derek Theler), hunk-extraordinaire, dives into the Hawaiian surf to save bikini clad Cindy (Ashleigh van der Hoven). He saves and the two have pre-marital sex. Jasmine (Erica Cerra), a beautiful lawyer, interrupts and whisks him to Capetown. Chase is hired by crime-lord Jake (Paul du Toit). Jake desires immediate pre-marital sex with Jasmine, but she will have none of that nonsense...yet. Jake hires Chase to retrieve the world's largest diamond. One of Jake's men was holding it when a great white shark ate him. Jake needs to find the shark and retrieve the diamond.

Uh oh, Nix (Arnold Vosloo), an even meaner crime-lord wants the diamond and lets Chase know he will kill him if he doesn't bring him the diamond. Chase, being the man's man that he is, pursues Jasmine and works on getting her into bed. Guess what...Jasmine starts liking him, probably realizing he is a real man, not like those wimpish milquetoast weirdos who try to pass themselves off as men. Chase better hurry as Nix abducts Jasmine, strips her, hoses her down and fits her with a sleek black cocktail dress. If Chase won't bring him the diamond, he will carve her up. Oh yeah...the shark? The beast is eating swimmers and boaters. As Nix uses recently murdered boaters as bait, Chase sets out to save Jasmine, retrieve the diamond, and kill Nix. 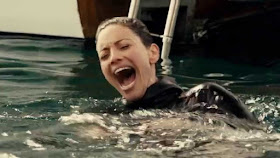 The ending is spectacular. Just when you think this is more of a crime thriller than killer shark tale...the beast attacks. Will Chase get to have pre-marital sex with Jasmine? How likely is it that the monster shark will give up its swollen gem?  What does Chase have planned for Nix? No spoilers here but Nix' fate is so fantastic...you'll see. Directed by Sheldon Wilson, "Shark Killer" is a terrific story of a real man pursuing basic carnal sex with sultry women...and killing sharks on the way.
Christopher Zisi at 2:37 PM
Share