Dolph Lundgren! Danny Trejo! Natassia Malthe!  Do you really need to hear anymore? If you do, how about a lot of bloodied corpses, an elongated gunfight, some steamy sex, and more gunfights? This one is kind of like a light Coen brothers film. Interestingly enough this film came out about five years after Harvey Weinstein raped Natassia Malthe in her hotel room, and there is a scene in this film in which Ms. Malthe's character is...well...you'll see. From 2015 "4Got10" directed by Timothy Woodward, Jr.

Brian (Johnny Messner) wakes up with amnesia at the aftermath of a bloody gunfight. Corpses litter the dessert and Brian is the only one with a heartbeat. $3 million in drug cartel cash is also there. The cash? Yep belongs to a ruthless cartel guy, Perez (Trejo). The sheriff (Michael Pare) shows up and finds the cash. He and Brian meet and Brian shoots his ear off and absconds with the cash. Uh oh, Perez' son is killed in the gunfight and Perez is after more blood and the cash. As the amnesiac Brian, wounded and confused, flees with the cash, the sheriff, Perez, and a mean DEA agent, Rooker (Lundgren) pursue him. 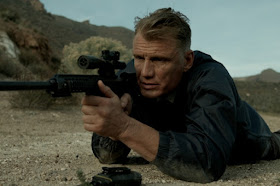 Brian crashes his van at a house that just so happens to belong to Perez' lawyer...and his hot wife, Christine (Malthe). Brian has no idea who he is, but Christine does. Christine's husband constantly forces her to perform deviant sex and Christine is happy that Brian tied him up. She will then willingly have deviant sex with Brian and she obviously knows him well. Harvey Weinstein eat your heart out. Uh oh...Perez, and the sheriff are on their way. As Christine satisfies Brian, she herself plots to abscond with the cash. As for Christine's abusive hubby...well, in a figurative way she divorces him. As the conclusion rapidly approaches, lots more will be murdered, and a twisted revelation awaits. 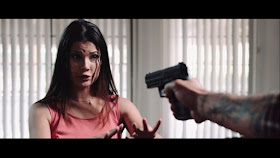 Natassia Malthe turns in an incredibly steamy performance rivaling her performance in "BloodRayne: The Third Reich."  Everyone in the cast looks like they could pull out a pistol and blow a dozen schmucks away at any second. Will Brian get away with the cartel cash? Will Dolph Lundgren and Danny Trejo have a knock down drag out melee? Is Natassia Malthe's performance her way of telling Harvey Weinstein, "Screw you, you piece of s#@t!"?  A fun film, no doubt. Fans of the Coen brothers will see some of the twists coming. For a vicious good time with a very erotic Natassia Malthe performance, see "4Got10."
Christopher Zisi at 2:09 PM
Share