It is no secret that my favorite movie of all time is Crocodile 2: Death Swamp . This 2002 horror epic followed a lesser known film, 2000's "Crocodile," directed by Tobe Hooper. Like 'Crocodile 2' the "Crocodile" has everything a great monster film should have...gore...beefcake and cheesecake...great kills...a neat creature...and an epic ending. Fans of the Syfy channel may have seen these two films, but if you haven't...do so! 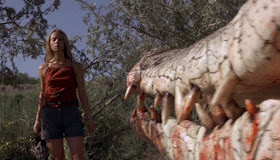 Some great looking hunks and babes are spending Spring Break in a houseboat on a lake. Marijuana, adult beverages, Rock & Roll, and pre-marital sex will rule the day. Claire (Caitlin Martin), who is clad in a bikini for much of the film, joins her hunk BF Brady (Mark McLachlan). The two will suck face and have the aforementioned pre-marital sex. Uh oh...a former one-night stand of Brady's also joins the party, Sunny (Sommer Knight). Sunny likes having guys do body shots off her bikini clad torso. The crocodile attacks! A 50 foot one that may be an Egyptian deity (don't ask). It eats the drunkest of the kids (Greg Wayne) and sets the houseboat adrift. 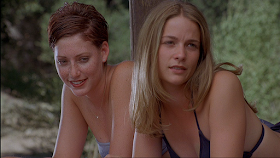 The gals, still clad in bikinis bicker and behave like girls. They'll look great as the monster chews them up. The guys will look great w/o shirts on, and will also look great as the thing crunches on them. Now the surviving hunks and babes are on the run. Sunny, who is still trying to seduce Brady, and who set off earlier for skinny-dipping, is amazingly still alive. Claire isn't speaking to Brady anymore as she is mad he also had pre-marital sex with the skank...and the skank looks better in a bikini than her. They run fast, even the sultry Annabelle (Julie Mintz), who had been the only one behaving kinda like an adult starts acting childish...spoiler alert...she'll get it while using the restroom...heartbreaking! Uh oh...there might be a reason, other than nutritional needs, the monster is chasing the hunks and babes.

Will any of the hunks and babes survive? Does the skinny-dipping skank actually have a chance at surviving until the end credits? Is the giant crocodile a mere metaphor for the bleak future that awaits our under prepared and immature college graduates? This is a fun one and the scenes where the creature eats cast members are gratuitous. For some great looking beefcake and cheesecake, some nice gore, and a heartwarming story of when passions collide...see Tobe Hooper's "Crocodile."
Christopher Zisi at 2:47 PM
Share