As the Great Depression drove many desperate Americans into lives of violent crime, the supernatural also took a foothold on the heartland. Dillinger, Capone, Pretty Boy Floyd, and of course Bonnie and Clyde perpetuated much carnage with bullets, but the toothy menaces also found fertile ground. In a gritty, realistic horror film, we will see what happens when these two scourges on the American landscape mesh. Hence 2008's "Bonnie & Clyde vs. Dracula." 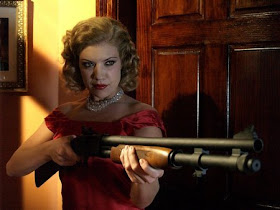 Bonnie and Clyde (Tiffany Shepis and Trent Haaga) rip through rural America spraying Tommy-gun carnage along the way. Pursued by the law the duo hole up in the outskirts of a farm community. Meanwhile, in a mysterious house nearby, the mad-scientist Dr. Loveless (Allen Lowman) conducts experiments to restore his body back to normal after being horribly disfigured. His beautiful half-wit sister Annabel (Jennifer Friend) is forced to act as his assistant. She is imprisoned by Lawless and detained by an electronic collar that mandates her loyalty. Oh yes...the experiment! Lawless has recovered Dracula's remains and has succeeded in restoring the bloodsucker to life (or whatever you call it).

Now Dracula wants blood...female blood. As Bonnie and Clyde attempt to rob some moonshiners a vicious gunfight erupts and their buddy is hit. Bonnie learns a doctor lives in a nearby house and she goes to fetch him...not knowing the doctor is a mad-scientist and his guest, Dracula, awaits for her blood.  Bonnie sets her sights on the house and Annabel plots a daring escape from her brother and the vampire. As Dracula bites his way through a weird dinner party thrown in his honor, Annabel will have to dodge corpses and the undead to escape and Bonnie is set to walk into an ambush...of her jugular vein.

Quirky and weird, this film may seem an awkward attempt to weave a few different plots together. Stay with it, however, as Annabel will connect the dots with her weirdness and innocence. As off-beat as this film is, the ending is incredibly eerie and unsettling. As Faye Dunaway and Warren Beatty rightly assume their places in the forgotten actors of yesteryear category, Tiffany Shepis and Trent Haaga do a fine job as the homicidal pair. Directed by Timothy Friend, "Bonnie & Clyde vs. Dracula" is a weird and horrific jaunt through the depression era heartland.
Christopher Zisi at 2:18 PM
Share