In 1978 "Dawn of the Dead" was released in Italy as "Zombi."  A year later, hoping to capitalize on the success of George Romero's film, the Lucio Fulci zombie movie was released in Rome as "Zombi 2."  Quickly, this "rip-off" made its way to the U.S. and hit theaters and drive-ins as "Zombie." In 1978 I sneaked into the Rated X (NR actually) Romero classic and saw what I believed was the perfect film, with no need for elaboration.  A few years later, still a minor, my dad and I saw the Fulci classic at the drive-in...and wow!  Zombie vs. shark!  Just as good as "Dawn," was the Italian version...at least in my mind. 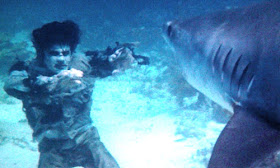 A derelict yacht arrives in New York Harbor. The cops who board it are attacked by a hulking zombie, which kills one of them and falls into the water.  Anne (Tisa Farrow) is summoned by the police, as the yacht belongs to her dad.  A note on the yacht, from her dad, reveals that an epidemic has hit the island of Matool. Desiring to find her dad, Anne teams up with handsome reporter, Peter (Ian McCulloch), and the two fly to the islands.  In St. Thomas, our duo team up with Brian (Al Cliver) and Susan (Auretta Gay), who have a boat, and the quartet set sail for Matool (an island the natives say is cursed).  Just shy of Matool, Susan decides to go SCUBA diving...nude!  Never a good idea. In a classic zombie film scene, while avoiding a tiger shark, a zombie appears.  The zombie and the shark then engage in a battle to the death.  No big deal, the team then continues to the cursed island.

Oh yes...on the island, Dr. Menard (Richard Johnson) is battling a zombie epidemic outbreak. Menard's hot wife (Olga Karlatos) is spooked.  She should be...as her death scene (big splinter through the eye) may be the most memorable death scenes in zombie film history.  Oh yes, this death scene will follow a gratuitous shower scene.  Uh oh...more and more zombies destroy Matool's tourism hopes, and our quartet arrive.  Anne wants to find her dad...that won't happen, and Peter wants a story for his paper...that might happen.  As the zombie population quickly grows, escape becomes the order of the day.  Can our foursome escape and make it back to New York?  Will Matool's epidemic spread?  Was Cuba's national healthcare system crafted in fear that Matool's carnage would spread?

Filmed in Rome, New York City, the Dominican Republic, and Mexico (the shark scene), "Zombie" still pleases audiences today.  Many claim Fulci is a flawed director, but so is Romero.  No matter, both are masters of the zombie in the zombie genre. Like "Dawn," "Zombie" is ambitious....even by today's standards.  With more gratuitous scenes than "Dawn," Fulci's film, to many, is the best zombie film ever made.   If you're curious, "Zombie" is available on YouTube.
Christopher Zisi at 12:28 AM
Share