Hellmouth, The Common Man vs. Hell

..okay, maybe not the common man. Our protagonist, a groundskeeper at a spooky old cemetery is hardly common.  He is a loner.  He is dying from a brain malady.  He has memorized all the residents of his cemetery. No capes, no sleek costumes, no babes in waiting....nope...Charlie (Stephen McHattie) is that weird old guy children fear, and who has spent his life avoiding other human beings.  But an epic battle will need to be fought, and guess who will be asked to fight it. Let us look at 2014's "Hellmouth." 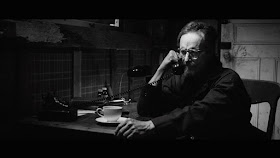 Charlie, the cemetery groundskeeper, is retiring in a few days and moving to Florida. He will die of a disease soon, and wants human companionship in his sunset.  Not so fast. The creepy cemetery director, Fred (Boyd Banks), forces him to hang on for six more months and be the caretaker at an even creepier cemetery. Oh yes....Fred gives Charlie an old key and instructs him never to be more than 10 feet away from that key.  Suffering from a brain malady, Charlie drives to the other cemetery. On the way he meets Fay (Siobhan Murphy), a sultry and mysterious babe.  After meeting Fay, Charlie begins going through a transformation in which his terminal illness vanishes.  Fay also implores Charlie to keep close to that key. 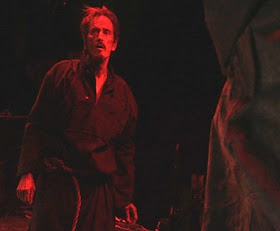 Once at his new digs, the weirdness increases.  Through his meeting with the sheriff/demon, Charlie learns the morbid fate of the past groundskeepers.  Uh oh, after some killings, Charlie learns that Fay is captive in a netherworld (...that sounds a lot like Hell). With some vague instructions from the only love he has ever had, Charlie embarks on a quest to free the fair Fay.  He will battle demons and monsters in order to reach the arena of a final conflict that could tip the balance between Earth and Hell.  Is Fay worth it?  Is her victim status accurate, or is she a demon in disguise? Is Charlie a capable hero, or is he merely playing the poor schmuck?

Directed by John Geddes, this is a very nice looking horror/fantasy yarn. The visuals in this film are amazing.  The creatures and demons are neat, but so is the artistic look of this film.  Black and white captures Charlie's existence, but as heroism and humanness seep into Charlie's ethos, color is introduced in the frames. Mr. McHattie is terrific, and this film serves as a salute to the individual that each of us can tap into.  A bit different, and not afraid to delve into the epic and exaggerated, "Hellmouth" is a horror film you will not want to miss.
Christopher Zisi at 12:03 AM
Share