Lyn Thomas is not a household name, but during a short period over a half century ago she was a terrific B- movie actress.  Never landing a role on any Hollywood blockbuster, Ms. Thomas would appear in TV classics such as Dragnet, Border Patrol, and Wagon Train.  Today we examine her most famous film...1958's "Space Master X-7."  Filmed like a Film Noir piece, or a 1950s detective film, the beautiful blonde plays a woman on the run.  From an abusive husband?  From the police?  From a jealous beau? No!  Deadly space microbes that consume you like primordial ooze feasting on a lab rat. 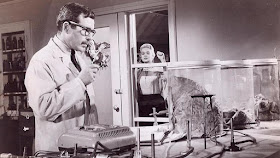 Satellite, Space Master X-7, successfully returns to Earth.  On it is a canister of space microbes.  These microbes are an experiment of Dr. Pommer (Paul Frees).  Pommer's canister has captured some microscopic life form, and he unwisely brings them back to his lab.  Now we all know never to mix deadly space microbe experiments with women, but Pommer....well...he's a guy.  The cad, while feeding the microbes, fends off his latest paramour.  Laura (Thomas) has dumped the brainiac in favor of returning to her husband in Honolulu.  After a tiff, Laura runs out, but Pommer returns to his microbes, which have grown, busted out of their jars, and now dine on Pommer like Haystack Calhoun at a Western Sizzlin buffet. Uh oh....Laura didn't flee alone...she has some alien microbes joining her. 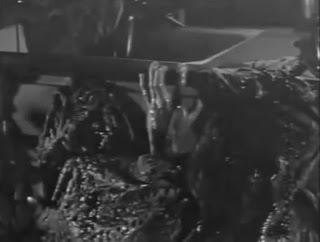 John (Bill Williams), from government security, and Private Rattigan (Robert Ellis) respond and find the liquefied Dr. Pommer, still being feasted upon by the space fungus.  They realize he had a female visitor who is now leaving these alien microbes wherever she goes.  Unbeknownst to the lovely Laura, everywhere she treads, and everyone she meets must either be burned or decontaminated.  As more saps are consumed by the deadly fungus, Laura's trek will take her to places that put millions in danger. Can John and Rattigan find her before all of Los Angeles is infected?  May this explain L.A.'s plight in the AMC hit TV show, "Fear the Walking Dead"? 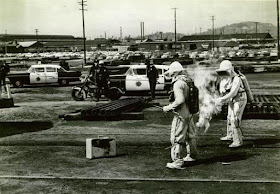 A minor B scifi/horror piece from the 1950s, "Space Master X-7" is a lot of fun.  Flawed? Sure.  However, this is a much better film than the recent Christopher Nolan scifi idiocy, "Interstellar." Directed by Edward Bernds ("Return of the Fly," "The Three Stooges"), treat yourself to some good old fashioned 1950s schlock and cheesecake.