Picture this! Grouchy, wheelchair-ridden Mildred is celebrating a birthday.  Her sultry nurse wheels her to the table, and Mildred nearly goes hysterical because the clown has yet to arrive. On cue, a 35 foot monster croc invades the festivity, vomits the clown's head on Mildred's cake, and eats her sultry nurse.  Oh yes...this is all done in grainy, 1970s drive-in, film fashion.  The scene, of course, continues. If this appeals to you, see 2016's "Zombie Croc."  This film is so good, it has escaped the notice of IMDB. 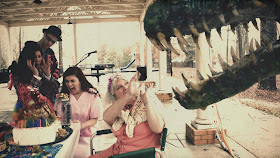 A weird voodoo rite awakens a 35 foot zombie croc.  Our monster gets right to business, tearing a hitchhiker and her three would be rapists to pieces.  Deputy Abby Rivera (Crystal Howell) comes across the crime scene and takes charge.  The mayor wants to blame the carnage on a boating accident, but the town's backstory suggests something more lurid.  The sheriff's office is in the midst of evicting some ancestors of slaves from their swamp-side property so a developer can build a mall on the land.  Yep...that's when the carnage begins.  After a clown and the aforementioned party revelers are pureed, three scientists come to town to trap the croc. 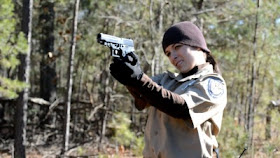 Abby tries to assist them and Ranger Sam (Apryl Crowell) has a pretty good plan.  Unfortunately for the pretty Sam, she will be turned into a zombie, and will team up with the croc to ruin the scientific endeavor.  Seemingly powerless to fight the voodoo fiend, Abby is graced with the appearance of the one handed, hook clad Crocodile Jack (Tony Jones). This salty croc hunter knows what they are up against and how to kill it.  Uh oh....killing the thing will not be easy as an army of human zombies are unleashed on the swamp land.  As our croc goes through deputies, scientists, and other swamp schmucks like crap through a goose, Abby and Jack make a desperate bid to end the carnage. 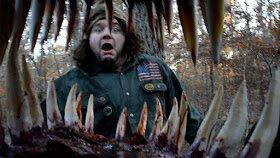 Will Abby and Jack be successful and create a new Cajun dish?  Does Animal Planet have a new inspiration for a prime-time TV show?  This blog loves monster crocodiles (who doesn't), and this film satisfies that love.  Nicely directed by Robert Elkins, good luck finding this one except on Amazon where the DVD is reasonably priced. By way of trivia, one of the first films ever done on the blog was "Crocodile 2: Deathswamp," in which a beautiful stewardess does battle with a 35 foot monster croc.  To see the review of that film click on this link Crocodile 2
Christopher Zisi at 1:37 AM
Share