From Dracula to the Creature from the Black Lagoon, Universal Studios capitalized on monsters during the 1930s, 40s, and 50s.  As these classic creatures have been revived by Universal over the past few years, it is easy to forget that Universal didn't have a monopoly on monsters.  Of course we remember Lon Chaney, Jr. as "The Wolf Man" in 1941, no one remembers 20th Century Fox' werewolf.  In 1942, that other studio released "The Undying Monster."  Ignored by modern audiences, this atmospheric horror film is action-packed and fast moving. 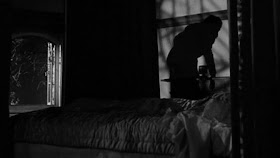 The Hammond family is cursed.  Ancestors were all killed by a mysterious monster.  As Oliver Hammond (John Howard) makes his way back to his mansion at midnight, he is attacked, and a female companion is killed by something.  Helga (Heather Angel) hears the howls and carnage and grabs a revolver and races to the cliffs to save her brother.  The police are immediately on it.  Christy (Heather Thatcher) is an eager detective....that is, eager to discover the supernatural.  She teams up with a scientist, Curtis (James Ellison), and they head to the mansion. 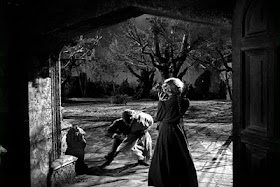 Christy knows the legend.  An ancestor sold his soul to the devil and lives in a secret room in the mansion.  But is that true?  Curtis and Christy develop many angles as to what's going on.  While Christy looks for ghosts or satanic ancestors, Curtis uses science to develop suspects.  But wait...some of Curtis' scientific discoveries defy the science we know.  Secret rooms, the family crypt, and corpses will be examined as the next frost approaches (Universal had a full moon, 20th Century Fox uses a frost to beckon the creature).  As more and more suspects appear, all signs point to the monster returning to do away with the remnants of the Hammond family. 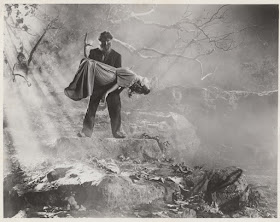 More of a detective story than 1941's "The Wolf Man," "The Undying Monster" pleases with a genuine horror movie conclusion.  Will the fair Helga be carried away by the beast? Will Christy be able to convince Curtis to look beyond science for answers? Forgotten over the decades, this film is available in great quality on YouTube.
Christopher Zisi at 1:12 AM
Share