Beneath, Hauntings, Grave Robbing, and Insanity

2007's "Beneath"is cursed with an unfortunate title.  Not an irrelevant moniker, however, in recent years, lots of good films have come out with the same title.  I even did a blog entry on another "Beneath" last August.  Back to this "Beneath," a fine film with crypts, cockroaches, hidden passages in a cavernous old mansion, evil forces lurking, and a homicidal malignant force all grace our feature today. Because the current title may cause some confusion, I suggest this 2007 film be re-released as "Naked Space Babes vs. the Tentacled Menace." 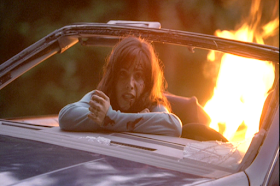 Seven years ago, Christy watches her older sister, Vanessa (Carly Pope) die in a fiery car crash. Present day, Christy (Nora Zehetner) is removed from nursing school because she is mentally unstable.  After the crash, our protagonist was institutionalized, and is still seeing weird visions. Christy has horrific visions of her sister scratching at the inside of her coffin, trying to get out.  See, Vanessa lived another six months after the burning, and at the funeral little Christy heard her big sister inside the coffin. Now she returns to her home town to attend the funeral of the family's caretaker, Joseph (Don S. Davis, Twin Peaks).  Uh oh, the visions of her sister increase, and Christy begins snooping. 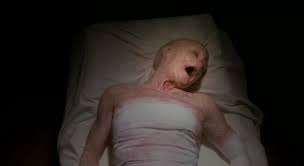 Christy is greeted coldly by her deceased sister's husband, John (Matthew Settle), and his mom (Gabrielle Rose).  However, her niece, Amy (Jessica Amlee) is happy to see her.  Amy tells her aunt that a dark force lives inside the mansion and prowls around at night. Believing her sister was buried alive, Christy finds out the body was never embalmed and the doctor who declared her dead was her husband, John. Now more deaths occur and all of them point to a mysterious specter inside the house.  As Amy and Christy seem to be imperiled by this force, John wants her gone.  Was Vanessa buried alive?  Is John a murderer?  Is Christy the real whack-ball; here?  Seasoned horror film fans may be able to guess at the conclusion, but the voyage there is a wild one. 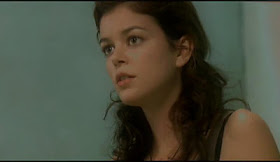 Masterfully directed by Dagen Merrill, this film has the same feel as "Twin Peaks."   Ms. Zehetner is terrific as a determined and unstable Christy.  Don't worry, as much as everything is explained, the supernatural is still a large part of this plot.  Available on Netflix, see "Naked Space Babes vs. the Tentacled Menace"......er....I mean "Beneath."
Christopher Zisi at 2:18 AM
Share