Man-eating giraffes! Demented Koala bears! Dive-bombing parrots! Perhaps a metaphor for the direction mankind is headed in if we keep abusing and exploiting the animal world, today we take a look at The Asylum's "Zoombies." Released earlier this year, with bad CGI, great acting, and lots of gore, this film takes the zombie apocalypse to the zoo. 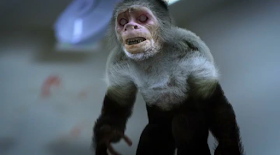 When pretty veterinarian Robin (Jennifer Titus) has her eyes ripped out of her face by a zombie-monkey, the game is on.  After monkeys kill all the vets, the Eden Wildlife Zoo, just short of their grand-opening, begins a horrific downward spiral.  Dr. Ellen Rogers (Kim Nielsen) is the zoo director, and she is conducting an orientation for some college interns.  Uh oh....she has brought her little girl, Thea (LaLa Nestor), to work.  After the monkeys escape, and run afoul of half Ellen's security team, the humans are now hunted by a zombie zoo population.  Zombie-giraffes pick apart a couple of the naive college kids who thought they were running from zombie-warthogs. 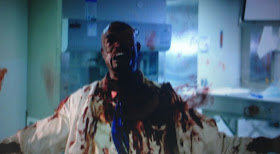 Securirty guard Rex (Marcus Anderson) and his intern, Lizzy (Ione Butler) become heroes in order to save Dr. Ellen and the other interns. Uh oh, this zoo has the largest aviary in the U.S. and if the birds become infected, they will fly over the fences and infect the world.  As Ellen strategizes to blow up the aviary, Rex and Lizzy valiantly try to save the other interns and escape. They'll have to go through Kifo, a no longer playful giant gorilla and a demented Koala before they can breathe easy.  Will our infected animals get out and infect the world?  Will zoo director Ellen, turned pyromaniac, be able to save the world?

Directed by Glenn Miller, "Zoombies" is pure fun.  The characters are attractive, and many will meet most gory fates. A scene when zombie-monkeys explode out of the torso of an unfortunate veterinarian will have you hollering. Available on Netflix, enjoy "Zoombies."
Christopher Zisi at 2:09 AM
Share