Sara Malakul Lane, a Thai-English model, has emerged as a terrific B movie actress, appearing in lots of horror films of late.  In 2015's "Shark Lake," she steals the show, portraying a beautiful sheriff deputy trying to save a resort town from sharks and Russian mobsters.  Oh yes, also excelling here is Dolph Lundgren...as a struggling ex-con with an unusual talent.  Okay...bad CGI and perhaps Syfy Channel quality, but our two protagonists are terrific and some of the kills are really nice. 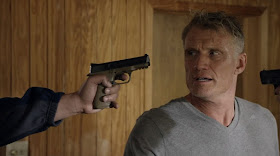 Deputy Meredith Hernandez busts Clint as the film opens.  Clint catches exotic animals and sells them to really rich mobsters.  He is put away for five years, and Meredith adopts Clint's little girl, Carly (Lily Brooks O'Briant).  Uh oh...five years elapses in no time, and Clint heads back to Alpine Lake to see his daughter. Meredith doesn't intend to let him see her adopted daughter.  Oh yes....mauled tourists begin turning up by the lake.  At first the cops believe it is a bear, but after a skinny dipping couple seeking pre-marital sex (...I know, don't they ever see these films) wanders into the lake, only to be attacked by a Bull Shark, the authorities figure it out.  A shark in a fresh water lake? 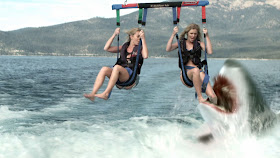 Lots of tips of the hat to "Jaws" are contained in this film.  Such is Peter (Michael Aaron Milligan), an oceanographer, the proverbial Hooper character, who assists Meredith.  Meanwhile, a BBC reality show crew is chowed down on by a bull shark family and now Meredith and Peter decide to kill the beasts, themselves.  But wait! Russian mobsters blackmail Clint.  The head mobster wants the shark for his collection, and will kill Carly unless Clint captures the man-eater for him.  As Clint seeks the shark, and a reunion with his daughter, Meredith and Peter also head onto the same lake which will contain many more dangers other than those of the toothy variety. 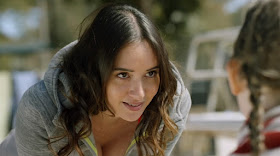 Will Meredith and Clint hook-up (...even though Dolph is old enough to be her grandfather)?  If so...what of the handsome young Peter, will he have to get eaten for this to happen?  Will Meredith ultimately need a bigger boat? Plenty of kills and even more jiggling bikini babes in much peril, "Shark Lake," with all it's faults, is so much fun.  Ms. Lane is terrific and her character, and looks, steal the show.  As the beach season fast approaches, take a look at "Shark Lake" on Netflix.
Christopher Zisi at 2:42 AM
Share