The Town That Dreaded Sundown, The 2014 Version

Not a remake, but a sequel.  The 1976 drive-in classic begged for a sequel, though the mysterious end to that film contributed to the lore that is "The Town That Dreaded Sundown."  Today we look at the 2014 film which picks up over 60 years after the original ended.  Directed by Alfonso Gomez-Rejon ("American Horror Story"), this new film captures the fear that envelopes small town America during a rash of brutal murders.  In addition to a stellar performance by Addison Timlin, some really big Hollywood names also grace the screen.  Edward Herrmann, Gary Cole, Ed Lauter, and Veronica Cartwright shine, though Ms. Timlin's portrayal as a haunted teen steals the show.  Before reading on, you may want to read my review of the original TTTDS posted on this blog on October 15, 2014.

On Halloween, a drive-in theater in Texarkana shows "The Town That Dreaded Sundown."  Jami (Timlin) and her hunk date, Corey (Spencer Treat Clark) are two high school seniors that leave the show to make-out in a deserted wooded area.  Never a good idea!  The two seem like good kids and before they can get too into each other, the phantom killer appears.  He orders the teens out of the car, butchers Corey, and lets Jami live.  He tells Jami to tell everyone "This is for Mary, make them remember."  Who is Mary?  You'll find out at the end.  Jami is rescued, battered and scared. Texarkana is now in a panic.....the phantom killer has returned.  Can that be?  He'd be over 100 years old now.  A copy cat?  A descendant?  Jami's survival propels her into an eerie existence.  An awkward episode occurs as she attends Corey's funeral.  Her grandmother (Cartwright) explains to her the history of the original killings. 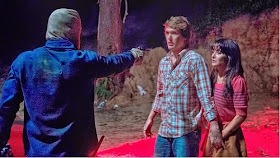 Corey's nightmarish and surreal trek through the remainder of the film is contrasted by Kendra (Morganna May).  The energetic skank picks up her soldier boy at the airport and brings him to a no-tell motel for a night of pre-marital sex.  Also, never a good idea.  In true slasher flick form, the killers tend to be prudes, and Kendra and her soldier are murdered by the phantom in tortuous fashion.  The Texas Rangers, led by the charismatic Lone Wolf Morales (Anthony Anderson) come to Texarkanna again to work with the locals.  Jami, as a coping mechanism, begins her own investigation into the murders.  Her belief is that if she can identify the 1946 killer, she will find out who the modern day psycho is.  Jami is real pretty, and picking up boyfriends comes natural to her...though none of her beaus will fare well.  As she delves deeper into the mystery, the killings continue, and now she herself is a target.  The new killer does seem to try to recreate the murders that occurred in the first film, hence we have another trombone murder.

The ending has disappointed some fellow critics, however, I don't see the ending as merely the revelation of the killer's identity.  This is largely a film about Jami, and the perils and pitfalls of escaping a haunted existence.  Prior to the final credits, Jami's narration is deep and ominous.  Her sentiments hint at renewal and dread.  Perhaps Jami's words to us are more profound than merely an ending to a slasher film.  Available on Netflix, see "The Town That Dreaded Sundown," and never play the trombone again.