Michelle Trachtenberg as a homicidal maniac, and Elisha Dushku as a sultry police psychologist are both alumni of "Buffy the Vampire Slayer."  These lovely actresses have supporting roles in 2014's "The Scribbler," which stars Katie Cassidy ("Gossip Girl") in the title role.  In Film Noir fashion, this movie is dark and weird.....just the way I like them.  Ms. Cassidy plays an outcast, tattooed and pierced, suffering from Dissociative Identity Disorder, or DID (multiple personality disorder), who just might be a brutal murderer.  In a world, set in the near future, being a little bit different can be deadly. As Suki (Cassidy) points out, "...in the war between individuality and conformity, the individual is always outgunned."  Regardless of the possibility that Suki is a killer, her quest for individualism in a world where conformity is forced upon everyone, makes her an anti-hero. 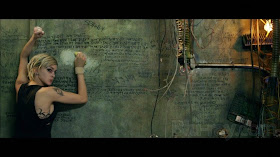 Suki is undergoing treatment for DID.  The Siamese Burn Machine, a more violent form of electro-shock therapy, kills off the extra personalities, one by one.  The end goal of this treatment is to leave Suki with one personality, and make her normal.  As Suki endures these treatments, she is sent to a slum apartment building when only nine personalities remain.  Because of her progress, she is allowed to finish the treatments herself.  As she checks into the Juniper Towers, she meets her neighbors, all of which are psyche cases.  Two of her neighbors are beautiful Bunny (Sasha Gray) and the nude Emily (Ashlynn Yennie, "Human Centipede").  Both of these beauties commit suicide...or were they murdered?...as Suki eliminates a personality.  The cops believe Suki killed these women, and Detective Moss (Michael Imperioli) and Jennifer Silk (Dushku) investigate the deaths (see picture below). 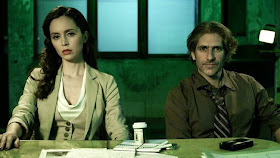 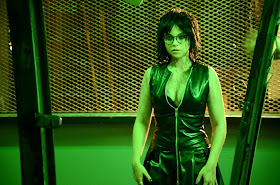 Regardless of the peril Suki faces from herself, the machine, the police, and Alice, her major quest is to buck conformity and remain an individual. Whether or not the other ladies are Suki's other identities, or their own people, Suki is indeed fighting a war being waged inside her.  As her multiple personalities dwindle, which one will she be left with?  Dark and rebellious, "The Scribbler" says a lot about conformity's war against the individual.  Is Suki the crazy one, or is the society that institutionalizes her the crazy one?  Available on Netflix, enjoy Katie Cassidy and several of her friends, in "The Scribbler,"
Christopher Zisi at 12:00 AM
Share