Escape From Tomorrow, The Horrors of Disney World

Screaming kids....long lines....pedophiles.....ahhhh, the magic of Disney World.  American culture has made a family pilgrimage to Disney a sacrament.  Criticizing Disney goes over as well as announcing you don't recycle.  I hate Disney, and I don't recycle....there...I said it!  I fully expect some government agency to start tapping my phones now, or perhaps social services will pay a visit to my home.  Heaven forbid we don't conform.  Perhaps, Disney is a symbol of the need for civilization to get its people to conform to idiocy so they cease thinking about anything that may produce real change.  Perhaps.  Or perhaps I am just a paranoid kook.  Randy Moore, who wrote and directed our film for today may be equally as cynical of Disney.  So let us now examine 2013's "Escape From Tomorrow," filmed entirely at Disney and EPCOT, without their permission.

As our film begins, Jim (Roy Abramsohn) has found out that he has been fired from his job, while he is at Disney World with his family.  Suddenly the "Magic Kingdom" takes on a different tone for Jim who then begins a psychedelic journey filled with dark images and eroticism.  As he shepherds his family through Disney, his wife constantly criticizes him and repels any affection he attempts with her.  He braves long lines, with his impatient son, only to have the ride cancelled when they get to the front.  Going through a personal Hell, alone, he starts having sexual fantasies.  Jim keys in on two teen-aged French girls (Danielle Safady and Annet Mahendru, pictured below), and drags his kids along while he stalks them through the park.  Emily (Elena Schuber), Jim's wife, catches on to her husband's behavior, and spends the rest of the film hating him. 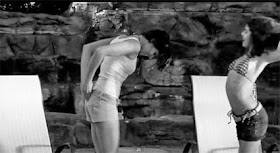 Jim's terrifying journey is enhanced by unsettling images from Disney and EPCOT.  This film is constantly turning darker, and while guiding his young daughter through the park, he gives in to temptation, by having wild sex with an ex-Disney princess in her hotel room.  Still fixated on the French girls, our anti-hero is constantly seduced by Disney vixens, including a nurse (Amy Lucas), as she treats his daughter's skinned knee.  As Emily rejects Jim, his mind (..or is it real?) creates fantasies to satisfy his need to be loved.  The plot gets wilder, as we discover a conspiracy by the Siemens Corporation which has a secret lab inside the big ball at EPCOT.  What are they doing to Jim?  As Jim's family life sinks deeper into despair and hopelessness, his fantasy world (...or is it real?) gets more erotic.

Will Jim snap out of his malaise and put his family back together?  Will Disney security arrest him for being a pedophile?  The ending is dark.....or is it?  On face value, or steeped with metaphor and symbolism, "Escape From Tomorrow" will change the way you think about Disney World.  This dark jaunt into man's abyss is available on Netflix.
Christopher Zisi at 12:00 AM
Share