The Black Sleep, The Softer Side of a Mad Scientist

"I must be allowed to continue my experiments." I've always wanted to say that.  The mad scientist may be the best character created in fiction over the past couple of centuries.  In 1956's "The Black Sleep" we have a great one.  Basil Rathbone portrays a mad doctor obsessed with medical miracles.  and his motto is "In the interest of science, anything is justified."  I love it.  In 2015, this logic gives us "The Human Centipede" films.  However, for 1950s standards, "The Black Sleep" may have been just as stomach turning than the HC franchise.  Old, dark castles, eerie hallways adorned with suits of armor, lunatic mutants, a damsell in much distress (...who screams really well), a body snatcher, and of course the mad scientist are the ingredients in this neat horror flick.  Oh yes, the cast also includes Lon Chaney, Jr., Tor Johnson, John Carradine, and Bela Lugosi...need I say more. 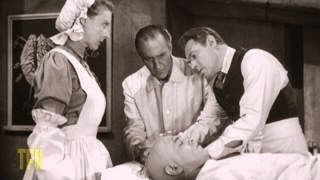 Dr. Cadman (Rathbone) saves Dr. Ramsay (Herbert Rudley) from the gallows.  Cadman has discovered an ancient drug that can make a subject appear dead, but in reality merely slows down physiological functions.  After administering the drug to Ramsay, the prison believes him dead. Cadman brings Ramsay back to his castle where he performs human experimentation on the brain.  At first Ramsay is grateful.  He is alive and given the opportunity to assist a genius.  Uh oh, the beautiful Laurie (Patricia Blair) is attacked by Mungo (Lon Chaney, Jr.).  Mungo is a violent lunatic that is bent on strangling the fair damsel.  Cadman confesses that Mungo used to be a brilliant doctor, and our mad doctor claims to be trying to restore him to his brilliance.  Double uh oh!  Ramsay discovers the cadavers which him and Cadman are experimenting on are in fact...not cadavers...but living schmucks who have been given this ancient drug, aka the black sleep. 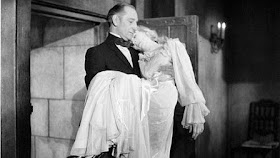 We can understand the madness, as old Cadman has a 33 year old wife who is a spitting image of Veronica Lake (Louanna Gardner).  Cadman is obsessed at bringing her out of her coma, which she has been under for almost a year.  As his body snatcher, Odo (Akim Tamiroff) brings him more not so dead bodies, Ramsay realizes he must stop the madness.  As Ramsay and the beautiful Laurie fall in love, both lovebirds come under increasing peril.  As our amorous duo determine to end Cadman's experiments they find the dungeon where unsuccessful experiments are kept.  The unsuccessful experiments are led by a weird old man (John Carradine) who believes he's in the crusades, and feature a brute named Curry (Tor Johnson)..the man Ramsay was said to have murdered.  Cadman must act fast, as Scotland Yard nears the castle. 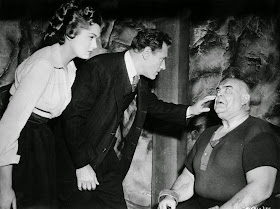 The ending is wild and will feature many blood curdling death scenes.  What is Mungo's reason for wanting to strangle the fair Laurie?  Does true love sanction the actions of a mad scientist?  Why not get Veronica Lake to play Veronica Lake?  Available on Netflix, "The Black Sleep" was quite cutting edge in the 1950s.  Even today, this film will have the more squeamish among us turning their heads.
Christopher Zisi at 12:02 AM
Share