"Freedom is a gift that not everyone likes to receive."  The American cowboy!  Individual!  Rugged!  Independent!  America has turned its back on this noble figure.  America used to be a country of fierce independence and the world's hope for freedom against the tyrannical.  Not anymore.  As America has become a socialist nation that eschews independence and freedom, the rest of the world suffers.  Murderous tyrants, at one time, were cut down by America-now they are funded and armed by our government.  Alas, a western that correctly praises the historic cowboy as a savior.  Our modern culture looks upon the words "cowboy" and "gunfighter" as dirty words.  Modern westerns water down classic oater themes in favor of politically correct ones.  Not 2014's "The Dark Valley."  Oddly, this tip of the hat to the American gunfighter (...from Texas) is a collaboration from Germany, Italy, and Austria.  Directed by Andreas Prochaska, the most pro-American film and best western of the past 50 years, was created without the help of any American. 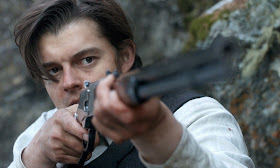 A lone gunfighter, Greider (Sam Riley, pictured above) rides into a town tucked deep into the Alpes.  The mysterious stranger has happened upon a town ruled by the evil Brenner family.  As the winter snows come, this village is cut off from the rest of civilization. Greider finds lodging with Luzi (Paula Beer) and her mom.  Luzi will wed Lukas (Thomas Schubertz) soon, but oddly enough, there is no joy in her home.  The Brenners rule this hamlet, and when a wedding occurs, the Brenner boys are giving sexual liberties from every bride on their wedding nights.  As Greider makes his way into town with Luzi, it is apparent that the Brenners are keeping watch on him. Alas, Greider is not a total stranger.  His mother was raped by the Brenners on her wedding night, and his dad was crucified on a cross when he tried to protect her virtue.  Unfortunately for the Brenners, Greider is back for vengeance.  Lukas and Luzi are pictured below. 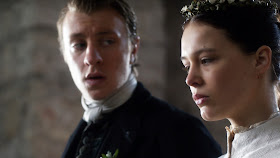 Greider goes to work.  In ways that would make Jason Voorhees proud, he goes through the Brenners like crap through a goose.  As Luzi gets closer to her wedding day, she knows that she will be soiled by the Brenners before she is able to be Lukas's wife.  The Brenners aren't dumb; they figure out Greider is their nemesis and set out to track him down.  Greider realizes that his success may also enable Luzi and Lukas to embark on a lifetime of marital bliss, which his own parents were denied. Will Greider finish his wrath before Luzi and Lukas's wedding night?  Will the Brenners' counter-assault eventually stop Greider dead in his snowy tracks?

This film is beautifully shot in the snowy Alpes and contains a hauntingly seductive musical score.  Mr. Prochaska masterfully combines elements of a Sergio Leone western, "Braveheart," and "Friday the 13th" to make one of the best cowboy films ever in history. The acting is superb, and the gunfights are gritty and violent. The bleak snowy weather perfectly enhances the brutal themes of this film and the dichotomy between good and evil is not blurred.  Available on Netflix, dubbed into English, do not miss "The Dark Valley" ("Das finstere Tal").  How sad, that a film about the most noble of American characters has to be crafted in Europe.