British actress Susan George ("Straw Dogs" and "Dirty Mary Crazy Larry") was one of the most alluring figures in 1970s cinema.  Empire Magazine named her one of the 100 sexiest stars in film history (...they are correct).  Still acting today, as well as running a stud farm for Arab horses, Ms. George was widowed in 2010 when her actor-husband, Simon MacCorkindale died.  This beauty flourished on film especially when she was in much peril.  In "Venom," her nemesis was a poisonous snake, and her death scene was one of the most memorable in film history.  In "Straw Dogs," her antagonists were thug rapists, and her plight was incredibly horrifying.  Today's feature, "Die Screaming Marianne" from 1971,  Ms. George plays an exotic dancer targeted for mayhem by her stepfather and nymphomaniac half-sister. 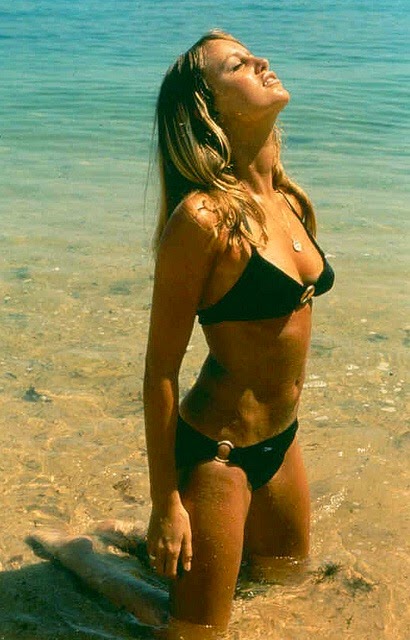 Marianne "The Hips" McDonald (George), an exotic dancer, flees her gig in Spain as her stepfather sends his thugs to collect her.  Now on the run, as she has spent most of her life, Marianne returns to London.  Her stepfather, a disrobed judge (Leo Genn) needs Marianne because only she has access to the large bank account of her deceased mother.  Meanwhile in London, Marianne foils the judge's plot by marrying Eli (Barry Frome).  The judge is a clever sort, and concocts a scheme to lure our heroine to his villa in Portugal where he plans to seduce the bank account number out of her.  Oh yes, our judge is game for incest, and has a very provocative episode with Marianne's evil half-sister, Hildegard (Judy Huxtable, pictured below left). 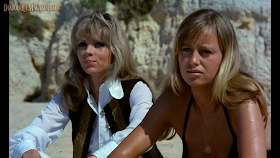 As Marianne and Eli play the role of lovebirds in front of the evil and jealous judge, Hildegard plots.  The evil half-sister is bent on either seducing or disemboweling Marianne...or probably both.  This nymphomaniac emerges as Marianne's deadliest threat.  The evil half-sister becomes impatient and resorts to painful torture of Marianne.  Our endangered damsel must be sharp, as homicidal tendencies begin to be acted upon.  One mistake in judgment by our nubile dancer and she and Eli could assume room temperature.  Bodies begin to pile up, and Marianne "The Hips" McDonald engages in a battle for her life. 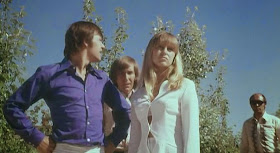 As Hollywood gives us irrelevant films about race relations starring Harrison Ford, they completely miss what the public really wants.  More films about exotic dancers in peril!  Will Marianne preserve her beauty and life, despite Hildegard's desire to be the fairest of them all?  Can an exotic dancer find true happiness in the prudish, post WW2 culture of western Europe?  Susan George turns in a stunning performance, and director Peter Walker makes sure her and her hips are displayed often in this film.  Available on Netflix, avoid the latest Harrison Ford disaster in favor of "Die Screaming Marianne."
Christopher Zisi at 12:01 AM
Share