The only problem with 2006's "Mulberry Street" is the title.  A more apt moniker for this horror flick is "Mutant Rat People Eat New York."  Rodents are not a new antagonist for this blog, see my review of "Rodentz" posted on July 21st of 2014.  If you can picture the films "Rec" and "Quarantine," only a more extreme and grim version of those two franchises, you have "Mulberry Street." Directed and co-written by Jim Mickle, this film is filled with great actors portraying tragic characters in an apocalyptic predicament.  Kim Blair (pictured below) is phenomenal as Casey, a disfigured veteran just released from a veterans hospital.  Nick Damici (who also co-wrote this film) portrays her father awaiting the return of his daughter.  Swedish actress Bo Corre is brilliant as a single mom, facing the mutant invasion while tending bar. 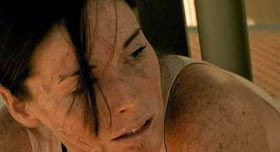 An emotional Casey begins her journey home with a scarred face to see her dad for the first time since returning from Iraq.  Residents of the tenement building where she is headed are having trouble with rats.  Apparently all of Manhattan is being feasted on by these vermin.  As Casey gets closer to home, the subways are closed because of rat attacks and she must finish her journey on foot.  Unknown to her, residents who have been bitten are turning into rat-people (please...no New York jokes here) and feasting on  other tenants.  Clutch, Casey's dad, emerges as a hero, saving a number of people in the building and going after Kay (Corre), to save her from the same fate at her bar.  His trek down the street is a horrific one as Manhattan has been overrun, and martial law has proven ineffective.  Clutch does reach Kay, which is great, since the viewer instantly embraces the fate of these two losers in life's lottery. 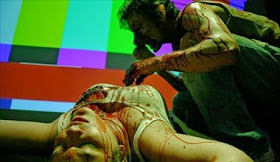 Clutch and Kay escape the bar just in time, as the creatures have turned the patrons into a buffet (see above picture).  However horrible the circumstances, when Clutch finally is able to set his eyes on his now disfigured daughter (pictured below), the scene is emotional and may illicit a tear from the viewer.  Now, holed up in a rickety slum, Clutch and a small band of survivors fight to ward off the monsters, and wait for the army to enter the city.  Not all of our the characters we bond with will survive, and Manhattan will be totally wiped out.  Will our protagonists survive the rat-people, and then the ensuing government response? 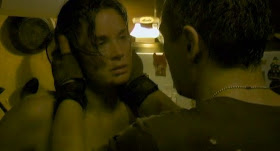 "Mulberry Street" is a grim tale which may be a metaphor for all the forgotten people left behind by the wealth in our major cities.  Comparable to the "Rec" films, the bitten here don't just manifest rabies, but actually turn into human-sized rats.  Available on Netflix, this is not a feel-good film, but a horror tale with real people as the rat fodder.