Invisible Invaders, The Dead Rise and Cause Much Mayhem

In the 1950s, mass hysteria centered around the threat of nuclear holocaust.  This fear persisted through the 1980s, but when the Soviet Union evaporated, people forgot about nuclear annihilation.  Instead, here in 2015, we teach our kids that a failure to recycle could destroy our planet.  We've come a long way.  1959's "Invisible Invaders" uses the fear of nuclear annihilation as it's backdrop, as an alien race invades Earth fearing human technology with the atom could peril the entire universe.  This film is often lumped with "Plan 9 From Outer Space" in their campiness.  However silly this movie might appear, at least the protagonists were not afraid of plastic bags. 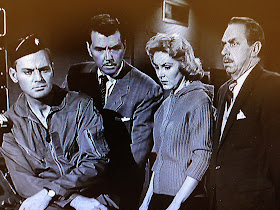 As our film begins, world reknown atom scientist, Dr. Noymann (John Carradine) pulls a Fawn Lebowitz and blows himself up in his lab leaving his entire city radioactive.  Simultaneously, invisible alien invaders land on Earth and occupy the bodies of the recently deceased.  When Dr. Noymann visits his friend, Dr. Penner (Philip Tonge), it is as an invader.  The invader tells Dr. Penner to convey to all the world governments that they must lay down all their weapons and surrender.  Dr. Penner summons his beautiful daughter, Phyllis (Jean Byron) and his assistant, Dr. Lamont (Robert Hutton) to fly to D.C. and plead to the world to dis-arm.  The world laughs at this request.  No matter, the invaders send a warning, causing plane crashes, dams to burst, factories to explode, etc.  Still skeptical, Earthlings go about their merry existences. 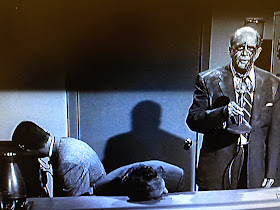 Then, during a Canadians-Red Wings game, a corpse, with an invader inside, commandeers the PA system at the Olympia and commands the people of the Earth to surrender.  Mass panic erupts worldwide.  'Tis interesting that no one believes the scientists and world leaders, but from the booth of hockey telecasters....well...that must be legit.  As corpses rise, Major Jay (John Agar) takes Lamont, Penner, and the beautiful Phyllis to a secret bunker to find a weapon that can kill the invisible tormentors.  The Major and Phyllis fall in love while Dr. Penner works around the clock.  Finally, Penner might be on to something.  The plan will require them to leave the bunker and face their nemesis.  The quartet, now man's only hope, set forth on an impractical mission. 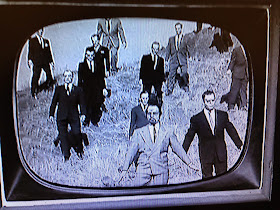 Will Jay and the beautiful Phyllis be able to start a family in a world where the dead stay dead?  Will Penner be able to invent a weapon that repels the invisible?  Will the inconsistent Red Wings defense of the late 1950s be exploited by the opportune Canadians high-scoring forwards?  This flick is a lot of fun, and should not be missed.  Thankfully, sci-fi films of  the Eisenhower era played on a hysteria that was truly frightening.  So...if you can summon up enough bravado, and peel yourself away from your fear of Styrofoam cups, "Invisible Invaders" is now available on Netflix.
Christopher Zisi at 12:02 AM
Share