I avoid superhero films at all costs.  I have no patience for Thor, Iron Man, Superman,or Spider-Man.  However patriotic I try to be, I have no interest in Captain America.  However, 2012's "Iron Girl" (aka "Aian Girl" or "Aian Garu")?  Now that is a superhero film I can get behind.  Let's face it, Robert Downey, Jr. as Iron Man does nothing for any of us.  However.....Kirara Asuka as Iron Girl?  Now we're talking!  The Japanese love for superheroines is deep, and in some circles has developed into a fetish.  Directed by Masatoshi Nogamine, "Iron Girl" is fun, alluring, and pleasing to the eye (...especially the man's eye). 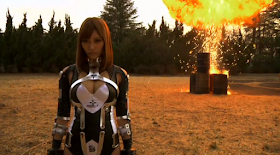 In a fictional era, the landscape is ruled by thugs called Crazy Dogs.  As our story begins, the beautiful and fair Anne is accosted by three Crazy Dogs who have rape in mind.  Clad in a kimono and carrying a teddy bear, Anne is no match for her tormentors.  Fortunately for Anne (Rina Akiyama), Iron Girl happens upon the scene, and she quickly dispatches our thugs.  Iron Girl is fast, has super-human strength, and can avoid bullets.  Iron Girl is an enigma.  She has no memory of her past, and as she states, "..my reason for living is to fight." Anne brings her back to her village where there is immediate suspicion cast upon our superhero.  However, when the guys see her breast size, they decide she can stay.  Uh oh....  Iron Girl's victory over the would-be rapists ensure that Crazy Joe Mitsuki Koga) will try to wipe out the village of peaceful peasants. 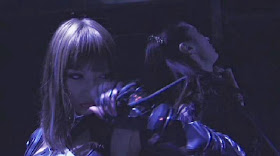 As doom becomes imminent, Iron Girl is convinced to stay and protect the villagers from the evil Crazy Dogs.  The heroine endears herself to the entire community by training them to fight, and allowing them to see her nude.  The initial attacks by the Crazy Dogs are repelled with ease by our lady and the newly trained villagers.  Crazy Joe's girlfriend, Catherine, decides she wants Iron Girl as a play-toy, and devises a plan to capture her.  Clad in black, armed with a whip, Catherine is able to string up Iron Girl and inflict a beating upon her.  Will the villagers come to Iron Girl's aid?  Now stripped of her power, Catherine owns Iron Girl, and Iron Girl is getting mad.  As Crazy Joe plots to annihilate the village, Iron Girl must regain her strength, break free of her bondage, and kick some but.  We are treated to a nice cat-fight between Catherine and Iron Girl (see picture above). 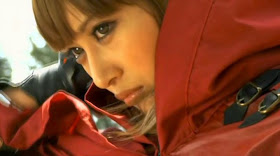 The mysterious stranger rides into town and saves the good people from evil crime lords.  This theme is so successful in westerns, however, is also adopted in this film.  Ms. Asuka is beautiful in portraying the title role, and a fascinating back-story centers on the heroine desperately trying to remember who she is and where she came from.  "Iron Girl" begs for a sequel, and I for one would rather see Kirara Asuka on the silver screen than Robert Downey, Jr.  The DVD is reasonably priced on Amazon.com, so treat yourself to a fetish from Japan.
Christopher Zisi at 12:00 AM
Share