The Milwaukee Brewers have had a frustrating couple of years, but Wisconsin baseball fans can take heart.  2013's "Billy Club" fans America's past-time in the land of Robin Yount, Gorman Thomas, and Ryan Braun.  Unlike the wholesome "Field of Dreams," this film piles on the gore, dysfunctional characters, uncomfortable relationships, and the obligatory insane-asylum escapee to form a weird horror yarn.  Just as no movie containing hot air balloons has ever been good...no movie with an escaped-homicidal-lunatic has ever been lacking.  Written and directed by Drew Rosas and Nick Sommer, "Billy Club" is a noble slasher film with an unusual edge. 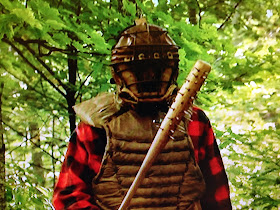 The plot: Bobby (Marshall Caswell) returns to 2 Rivers, Wisconsin after being away for many years.  He walks into a bar and meets his childhood chum, Alison (Erin Hammond).  Alison is a career girl, she tends bar and is proud of her breasts.  The two make instant goo-goo eyes at eachother.  Quckly two more of his childhood pals walk in, Kyle (Sommer) and Danny (Max Williamson).  The four form an awkward quartet with some even weirder sexual tension.  Uh oh...someone else has returned.  The quartet were all on the same little league team that lost in the playoffs 15 years ago.  The loss was blamed on Billy, an insecure kid who was humiliated by his team mates after the loss.  Billy has been in an insane asylum for the past 15 years as his reaction to the humiliation was to murder the coach and two of his team mates. 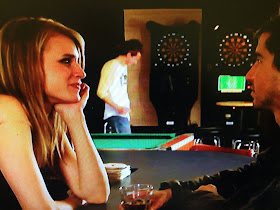 Unbeknownst to our horny quartet, a fiend (Billy?), dressed as an umpire, using a spike laced bat, is murdering the rest of that little league team.  The murders are brutal and very bloody.  Alison and Bobby get closer, engaging in pre-marital sex, which disturbs Kyle.  Now Billy focuses his efforts on these final four surviving team mates.  As our strange foursome go to a cabin in the woods for a week-end (...haven't they ever seen a slasher film?), Billy follows.  As this story progresses, we are let in on the back story of what exactly happened 15 years ago, and it is weird and uncomfortable. 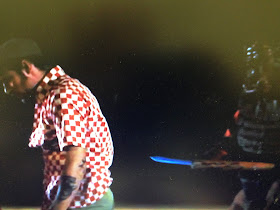 Will Alison and Mike's love grow in this bloody setting?  Will Danny and Kyle ever realize they are the fifth wheel?  Is the character of Billy merely a metaphor for Major League Baseball's exploitation of American culture under the protection of the government sanctioned Anti-Trust Exemption?  The DVD is reasonably priced on Amazon.com.  For a squirming good time, see "Billy Club."
Christopher Zisi at 1:49 AM
Share