Hats off to my new favorite Canuck (...no, not Henrik Sedin), Jean Benoit Lauzon (co-writer and director).  The rookie film-maker gives us today's film, 2014's "Gore, Quebec."  Filmed in Ontario, the wonderful fall scenery of the Canadian wilderness is part of this movie's attraction.  However, the attractions that will interest us today are a great looking cast, lots of bloody carnage, and a deranged Canadian.  Though unpolished, this slasher film has a charm to it, and a purity that matches the white snow which falls on our neighbors to the north. 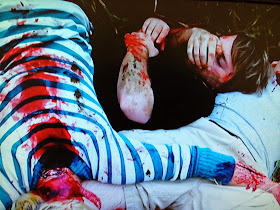 Lets start with the first 16 minutes of the film.  Some really annoying, however attractive, young adult Canadians are at a small party.  Some twerp is videoing everything.  Oh no!  A found footage film chronicling the social lives of really boring people!  But wait.  The film footage captures Katie (the very pretty Kate Elyse Forrest) scheming to fix single Mike (Blake Mawson) up with her chum, Amanda (Myrthin Stagg).  Exciting.  The plan, a week-end getaway in a cottage near a lake in Quebec where all the friends will gather, and Amanda will be invited.  If this isn't thrilling enough, we see the found footage of Katie convincing Amanda to accept the invite.  Whoa!  Because of work conflicts, Amanda will be driven up to the lake by Katie's fiance, Brandon (Lauzon).  Now 16 minutes into the movie, we the viewer are saying "..the only thing that will save this film is if a slasher invaded the house and axed all these twenty-somethings."  Guess what.  On cue, that is exactly what happens.  Now 17 minutes into the movie...game on! 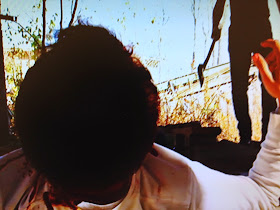 The next day, not knowing his fiance and friends are in pieces, Brandon drives the bickering Mike and Amanda to the cottage.  The grouchy couple take a boat on the lake and quickly find Kate's corpse.  Still bickering, they rush to shore to find Brandon with this tragic news, but Brandon is kind of busy (see picture above).  Running through the woods, continuing to annoy each other, our mismatched duo can't help tripping over the corpses of their, now room temperature, fiends.  Now there is a killer after them, and his ax is menacing.  On the run, Amanda and Mike make some really dumb decisions, setting up a bloody final confrontation with their new nemesis.  Who is this fiend? Apparently this fellow committed a mass murder about ten years ago, but somehow was not sent to prison.  A statement on Canada's justice system?  Ask Mr. Lauzon. 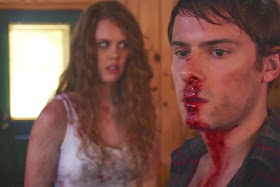 Will Amanda and Mike survive this psycho...and each other?  Is Mr. Lauzon's portrayal of a homicidal Quebecor a statement on the increasing alienation of conservative Franco culture from the rest of Canada?  I eagerly await Mr. Lauzon's next film.  No big names in "Gore, Quebec," but these young actors and actresses will definitely be seen in future films.  The reasonably priced DVD is available from Amazon.com.