In the style of a 1980s slasher film, 2003's "Cheerleader Massacre" is our selection today.  Be warned, if this first paragraph is at all offensive to your sensibilities, do not read the remaining text.  Whatever one thinks of this film, two weeks after seeing it, the first scene one will recall is when three irrelevant babes share a bath and then breakout the chocolate syrup.  Yeah we have decapitations, electrocutions, a cheerleader is drained of blood and gutted, a typical back story, and plot twists, but the main attraction here is a very attractive cast...and the bathtub scene.  Every actress in this film is stunning, even the ones who play cops. 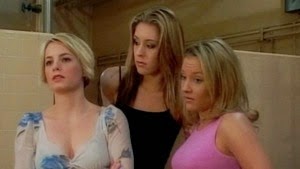 The plot: Four cheerleaders and their coach Ms. Hendricks (Tamie Sheffield, pictured below) are preparing for a road trip.  The previous day, a cheerleader, Kelly (Rikki Ray) and a jock were shish-kabobbed by a psycho while camping.  Her disappearance is of little concern to her cohorts, as they have last minute practicing and showers to attend to.  During some last minute locker room prep, two more cheerleaders are gutted.  With four left, Ms. Hendricks hurries them onto the van, driven by pervert Buzzy (Lenny Juliano, who also wrote this tale), and two cocaine addicted jocks.  Meanwhile, a serial killer has escaped prison and has started killing again.  A blizzard moves in and the van runs out of gas and our cheerleading party finds an abandoned cabin.  Several law enforcement personnel, most of them really hot, are on the case and realize the girls are stranded in the same woods the killer is loose in.  Deputy Adams (Gigi Erneta) is on the case, and Detective Demarco (Melissa Brasselle) helps out by sounding concerned on the telephone, but she is very good looking, so the plot doesn't suffer with her in it. 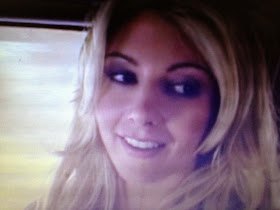 As our pep squad warm in the cabin, the deaths pile up.  Both jocks get it...of course (see photo below).  Ms. Hendricks and Parker (Charity Rahmer) emerge as the two main protagonists and begin to plot a strategy for escape.  Ms. Hendricks is unaware of the events of one year ago, when our cheerleaders participated in an awful episode which all swore secrecy to.  Before Buzzy is cut to pieces he tells the girls a classic ghost story, referenced in the first paragraph.  When a cheerleader asks "what does this have to do with ghosts?," Buzzy's response is "does it matter?"  Perhaps not.  As the beautiful Deputy Adams races to the cabin to save the surviving lovelies, our serial killer has already arrived....but is he the only killer? 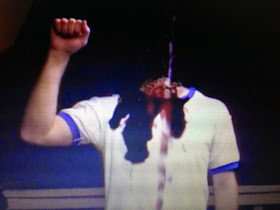 Filled with gore, shower scenes, beautiful female cops with guns, and cheerleaders, the appeal of this movie is obvious.  Sheffield as the coach and Rahmer as a cheerleader are captivating.  However exploitative this film (directed by Jim Wynorski) is, our female characters all find their fight and emerge as strong characters (cops and cheerleaders). Available on Netflix, and if you are not offended by chocolate syrup bath scenes, see "Cheerleader Massacre."