Maggot infested corpses.  Maniacs with meat cleavers.  Knives in backs.  Prison cat-fights.  Swallowing ground glass. A decapitation or two.  Nope, not a Lucio Fulci film, but a hard to find gem from Hong Kong.  1978's "Breakout From Oppression" (aka Sha Chu Chong Wei"), a horror film with all the makings of an Italian horror gore-fest.  When one of the main characters is a maniacal 17 year old girl who tends to (terrorizes, actually) her insane and invalid grandmother, keeps men hog-tied in her basement, and dismembers cute animals...well, you know that we have a cinematic achievement worth watching. 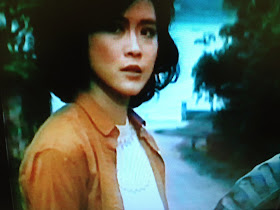 The plot: Fonda (Fonda Lynn, pictured above), has just served eight years in prison for a murder.  She has a letter from a newspaper president offering her a job upon her release.  When she gets to the paper, the president is missing, but the editorial staff believes her and hires her...probably because she is really good looking.  Simon (Alan Tam), the editor, is very sweet on her and eventually the two will fall in love.  Then weirdness begins for Fonda.  While taking a shower, she soaps up, only to painfully find out that someone has blended ground glass into the soap bar.  Later on, while serving her spring-rolls at a bake sale, Fonda is horrified to find out that small glass shards have been mixed in.  When a child starts coughing blood, suspicions are drawn to Fonda, the ex-con. 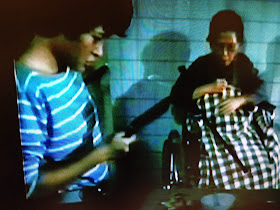 Oh yes, Sheena (Longa Chang), who is only 17, and in love with Simon, directs her wrath toward Fonda.  Unbalanced would be an understatement in describing Sheena.  Some poor sap is imprisoned in her basement, and she eventually kills him.  Her wheelchair bound grandmother is terrified of her (pictured above), probably because of the threatening manner in which she displays meat cleavers.  As Simon's attraction for Fonda swells, Sheena becomes even more psychotic.  Determined to butcher Fonda, Sheena disposes of anyone who hints that they may get in her way.  In death scenes right out of Hitchcock's "Psycho" and Italian Euro horror, Fonda seems doomed to be the next victim. 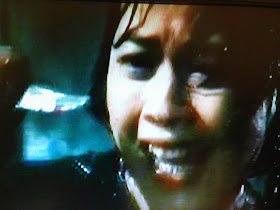 Just who did Fonda murder to land her in prison?  Are Sheena's motivations driven solely by her crush on Simon?  The ending is gory and exciting.  However victimized Fonda appears through the majority of this film, she gets her fight on for a deadly final confrontation.  This film is very well written by Godfrey Ho and directed by Karen Yang.  If you can find "Breakout From Oppression," seize the opportunity to view it.
Christopher Zisi at 1:05 AM
Share