Oklahoma Ward's "Crawl or Die," was released on DVD last month.  Starring Nicole Alonso, this film will attract a cult following quickly.  Both Ward (the director) and Alonso appear several times each throughout the credits, and have obviously delivered a product in which they put their heart and soul into.  I would be shocked if these two talents do not become the biggest names at horror conventions within the next decade.  Though I loved this move, some will not.  I must say that Mr. Ward's responses to his critics (check out the comments on IMDB.com) show a maturity and class that will propel him to great success in the film industry. 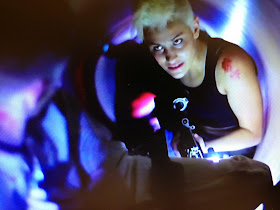 The plot: A virus makes women infertile.  One woman (known as "the package") is immune and an elite tactical team is tasked with delivering her to an installation on Earth 2.  Earth 2?  Yep, our planet is dying and a similar one is being readied, where women can give birth again.  Some may argue after seeing "Crawl or Die," this back story doesn't really matter.....they're wrong.  As soon as our team lands, they are under attack (....but from whom?).  They retreat into an underground chamber with the package (Torey Byrne), which must be delivered whatever the cost.  Our six man team quickly finds out that a hungry monster is dwelling in this chamber.  Our team ends up being led by Tank (Alonso).  Her name says it all....straight ahead with aggression and and force.  With very little lighting, Tank and her team have trouble confronting this creature. 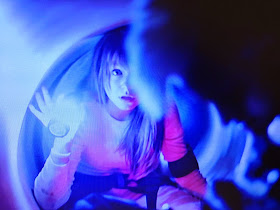 As team members get eaten one by one, and bullets prove ineffective, Tank leads the package deeper into this mysterious underground installation.  However menacing the monster is, even more ominous is the fact the further they go into these tunnels, the narrower they get.  With the roars of this thing close behind, their knees and elbows carry them through an ever narrowing maze.  With the future of mankind entrusted to her, and the increasing possibility that her team may fail for the first time, and the potential tortuous death that pursues them, Tank begins to show a human side (...not weakness, however). 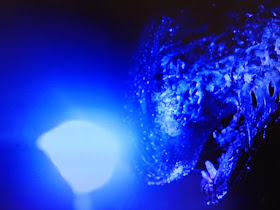 The ending is horrifying and will cause the thoughtful viewer to give it some heavy thought.  One clue: a sequel is promised.  The last 20 minutes of this film show us Tank is deeper than a mere comic book character, and within the next 18 months, I'm sure Mr. Ward will show us more of her.  Ms. Alonso did a magnificent acting job, and her performance must have been very physically challenging.  I hope to see more horror and suspense from these two.  The DVD is very reasonably priced on Amazon.