Horror of the Blood Monsters, Love Those Lobster-Monster Movies

The year 1970 played heavy on our social consciousnesses.  Space exploration competed with the Vietnam War and the deteriorating social make-up of our country for our attention.  Not lost on Director Al Adamson was our fear of lobster-like creatures that attack from their river lairs.  "Horror of the Blood Monsters" includes so many B movie props, that we the viewer can't help but be pleased.

The plot:  Vampires are attacking Earthlings at an epidemic rate.  Dr. Rynning (John Carradine) puts a space mission together to visit the far-off solar system which, he believes, the virus originated.  His crew consists of Bob (the grouchy captain), Willie (the silly dweeb), Linda (the shapely babe, played by Britt Semand), and Steve (who eventually beats out Bob for Linda's affection).  This is a stressful trip, not for our crew, but for ground control technicians Colonel Manning and Valerie (Robert Dix and Vicki Volante).  In the midst of activating image stabilizers, initiating countdowns, and coordinating satellite triangulations, the good Colonel and Valerie take plenty of time to demonstrate futuristic sex for us.  The Colonel is not able to satisfy Valerie at first, but he turns up all the dials and switches later on, which seems to do the trick.

Once on the planet, our crew explores.  They find dinosaurs and warring cave-men clans.  One of the clans is human, the other are former humans, now vampires after being infected with a virus.  The crew sides with the humans after meeting a shapely cave-girl.  Willie the dweeb and this neanderthal-woman fall in love.  Together they battle the vampire horde, lobster-monsters, bat-creatures, and radiation to restore happiness to this once doomed planet.

This movie has so much going for it, including monsters, space-babes, romance, and narration by Brother Theodore who plays the king vampire on Earth.  Will Dr. Rynnan find a cure for the vampire virus?  Will our three sets of lovers find lifelong happiness?  Will this far-off planet give peace a chance?  This movie is a lot of fun.  If "47 Ronin" had used many of these plot devices (and left out Keanu Reeves) it may have been a fine film. 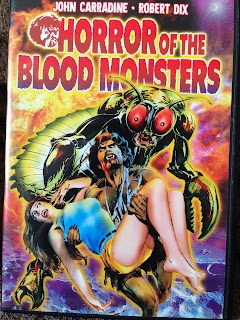