Happens.  You go out with a nice enough guy.  Then they begin to change...fall apart...melt.  Literally or figuratively, many young women have gone through this.  A good metaphor for this phenomenon is the 1988 film "Slime City," directed by Gregory Lamberson.  Add a heaping amount of gore, murder, and blood splatter, and we have a neat horror film from the golden horror decade of the 80s. 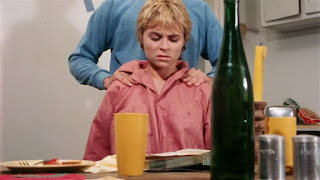 Clean cut college kid Alex (Craig Sabin) moves out of the dorm in order to get some alone time with his nubile coed girlfriend, Lori (Mary Huner).  Lori wants to stay a virgin and likes to study making Alex sexually frustrated.  Then Alex makes two friends with his neighbors.  First, the Goth-beauty Nicole (also played by Huner).  She's a nymphomaniac.  Then with Nicole's boyfriend Roman (Dennis Embry).  Nicole will have deviant sex with Alex and Roman introduces Alex to a new diet.  Now Alex is consuming this weird slime.  Uh oh...the slime makes Alex melt.  The only way Alex can stop melting is to...get this...murder people and have their blood splatter all over him. 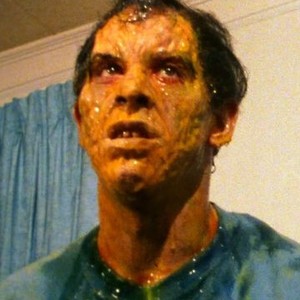 Now Alex is finding himself melting a lot.  Thus, Alex is killing a lot...prostitutes, muggers, or friends.  The secrets of this weird diet are revealed and Alex learns what is really happening to him.  As the film continues, Alex becomes more of his new self...a monster maniac.  Uh oh, again! Lori figures she is ready to go all the way, unknowing Alex' new predicament.  The murders increase and Alex changes more.  Lori is ready to give Alex everything and Alex is ready to take it.  Oh yes, Nicole worms her way into Alex' affections, too, as she is the same as what Alex is becoming. 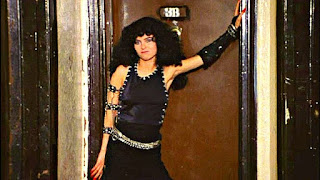 What causes the right guy to fall apart just when it becomes serious?  Will the nubile Lori end up giving her virginity away to a melting monster?  Sure, this is a question many of today's college girls are asking.  Slimy!  Gory!  Disgusting!  Wild!  This film is a minor classic from the 80s that seems to combine the charm of "Street Trash" with the romance of "Re-Animator."  See "Slime City" and realize why any good horror fan misses the 1980s.