Okay...this is a wild one.  If you are easily offended by bad taste...tune out now.  Nudity!  A lot of nudity...full frontal nudity.  In the shower, running through the woods, running through fields, climbing out of ponds, face first in a bucket of s%*t...nudity!  Nothing hidden by coy camera shots and a lot of bouncing and jiggling.  Nude babes doing awful things and having even worse things done to them.  Gratuitous shower scenes!.. Today we look at 2012's "Creeper," directed by Matthew Gunnoe. 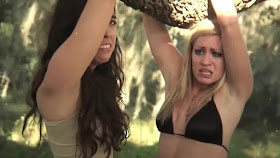 What!  You want to hear more?  A plot?  A pervert the size of Kane Hodder named Jerry (Darryl Baldwin) gets off on meeting frisky babes in a chat room.  He loves women who tease him and take their clothes off.  Enter four hot babes, Cally (Rohnja Morrow), Erica (Monica Chambers), Dana (Brittney Cardella), and Heather (Tara Dane).  Very hot babes who are ticked off that perves like Jerry are allowed to troll social media and make babes do all sorts of humiliating deeds.  A revenge plot is crafted and the dames, and they are hot, meet Jerry.  Jerry is a humongous war veteran and he has some social disorders.  He drools at the sight of the gals and the gals ask him to do a whole lot of humiliating stuff. 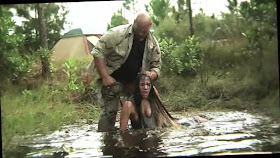 Jerry obeys the quartet of babes as his rewards are getting to see the gals naked, or in the shower, or kissing, or rubbing shower gel all over themselves in the shower.  The gals decide to go one step further and arrange to meet him.  Poor Jerry...the gals gang up on him and murder him and make it look like auto-erotica.  Uh oh!  Jerry isn't dead.  Now he's missing.  His psychiatrist warns that Jerry must be found because if he is off his psych-meds...he could be dangerous.  This won't bode well for our quartet of honeys.  Jerry abducts them while they are nude.  He'll torture and toy with them.  The gals will bicker and Jerry puts his hunt of them on social media and instantly gets 14 million views.  Now the gals are being hunted and the world is cheering for our pervert friend, Jerry. 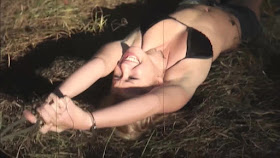 What does it say about us that we find ourselves cheering for the sex-craved pervert?  These actresses seem entirely too comfortable performing totally nude, do they also make...actually, never mind.  How far does Jerry intend to go in his humiliation of our four beauties?  This one definitely talks to our prurient interests and is not to be discussed at church or book club.  For a steamy time of humiliation and misogyny see "Creeper."