House of the Living Dead, Mad Scientist in the Attic

We shouldn't be judgmental. After all, most of us have laboratories in either our basement or attic. We've toiled with creating life from dead things, curing cancer, and genetically altering human test subjects to create the invincible soldier of the 21st century. The CDC and FDA would love to shut us down because we aren't required to go through diversity training and we don't recycle. Still, the real genius in science is apart from government funded nonsense. As Big Pharma researches new ways to make sex organs bigger, our good old mad-scientist dabbles in matters of the soul and invincibility. Hence 1974's "House of the Living Dead," a film from South Africa directed by Ray Austin. 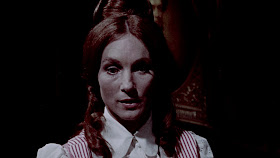 Breck is a mad-scientist, through and through. He is confined, because of insanity, to the attic in a plantation mansion where he has his laboratory. In that lab he separates the souls from animals (and humans), and keeps the disembodied auras in jars. His brother Michael (Mark Burns) runs the plantation. His fiancé, Mary Anne (Shirley Anne Field) is arriving from England. She's very pretty and doesn't know about the insanity prevalent in Michael's family. She arrives and no one is happy to see her. The Lady of the estate, Michael's mom (Margaret Inglis) demands she go back. Mary Anne should have listened. Still, she stays and is forbidden to meet Breck who stays in the attic except when he prowls the fields for human test subjects. 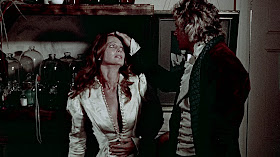 People begin showing up murdered around the plantation. Voodoo drums sound in the distance. Michael becomes more distant from the lovely Mary Anne. As the bloodshed gets closer and even enters the mansion, it is apparent that Mary Anne is in peril. She tries to reach out for help but her maid-servant is brutally murdered. Now the forces of the house (attic actually) have set their sights on the nubile damsel. The last 20 minutes of this film are wild and it is doubtful you have ever heard anyone scream as well, and for as long, as Mary Anne. Oh yes...what exactly is in the attic? You'll see. 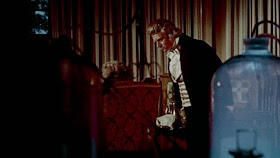 Will Mary Anne wise up and leave this god-forsaken plantation? What plans does the mad-scientist in the attic have for the nubile damsel? Can Michael get a clue and do something to save Mary Anne from a fate worse than death? This is a chilling one with brilliant and creepy sets. The insanity seems to grow more profound as the film goes on...as does Mary Anne's peril. For a good-old fashioned mad-scientist in a haunted mansion tale, see "House of the Living Dead."