Jeffrey Epstein and his customers beware.  The villain in today's film probably will not be viewed as the 'bad guy.' "Justice is mine...sayeth the Lord."  Well, in the Bible yes...but in revenge films when angry victims arm themselves...a different story.  Light sentences for pedophiles are an evil of the justice systems of western civilization today.  If you are a donor to the Clinton Foundation, you may even escape those sentences.  Today's film, 2020's "Guilt," from Australia and directed by Karl Jenner and Lyndsay Sarah may be the film big time political donors don't want you to see. 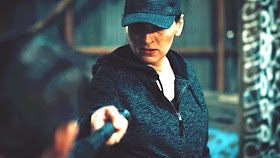 A serial killer is loose in Sydney.  Recently released pedophiles who served light sentences are being murdered.  Former child victim and psychologist Jessie (Janet Shay) is the culprit.  We see Jessie abducting these pedophiles, torture them...and kill them.  No great loss.  The pretty Detective Swan (Kristy McKenzie) is on the case but Jessie is smooth.  Jessie is certainly pained because of her awful childhood and she becomes an expert assassin...later we learn how.  Now she sets her sight on Grace (Hayley Flowers)...a real demon, seemingly.  Grace helped her boyfriend abduct, torture, abuse, and send dozens of children into white slavery.  She got off light after charming the sentencing judge.

Jessie is good.  She studies Grace and moves in.  Uh oh...Mitchell (Tom Wilson) re-emerges.  Five years ago, as a child, Jessie got him to open up about the abuse her endured.  So taken with Mitchell's story, Jessie tracked down the offender and offed him.  All isn't what it may appear...hence the biblical warning mentioned above. As more pedophiles die horribly at the hands of Jessie, a plot twist may have us looking at Jessie just a little bit differently.  Detective Swan slowly puts some clues together and Jessie seems to be having moments of doubt as she must face, not who she was, but who she has become.

What revelation does Mitchell have for Jessie?  Is Jessie an angel protecting the good peeps of Australia or just a vicious serial killer?  Did Jessie have access to the passenger logs on Jeffrey Epstein's private airplane?  This is a different kind of serial killer film.  More important than what Jessie may have become is your own feelings toward her at the end of this film.  For a thought provoking vengeance-fest, see "Guilt."