The line is a classic one! "I'm not a hooker...I'm in law school!" Jennifer Hill is a great actress who sadly we don't see more of. Shortly after this classic line she ends up in a cat-fight with another sultry actress, Noelle Reno. High heels...tight skirts...no bra and a tight sweater...Hill's character Elaine almost outshines the titular "Ice Queen." Throw in an avalanche Irwin Allen would be proud of...more cat-fights...and humans shredded by an Ice Age mutant femme. 2005's "Ice Queen" was directed by the late Neil Kinsella. I just had to ask, how did I miss this one all these years? 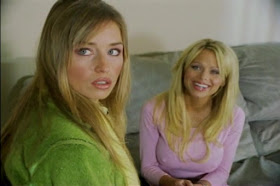 A military convoy is attacked and the cargo stolen. Cargo? A perfectly preserved babe from the Ice Age. Bad news...she's not dead. Worse news...she comes back to life when she's thawed. Thawed by mistake, the thieves are in an airplane when the prehistoric PMS babe comes to. Now she's ticked. She has big teeth and sharp fingernails and slimy blue skin. She kills the pilot and the plane crashes in the mountains causing an avalanche that buries a ski resort. At the ski resort is Johnny (Harmon Walsh) who is engaged to babe Tori (Reno). Bad news...wet T-shirt contestant Elaine (Hill) seduced him and now their all buried together in the beset resort with...the Ice Queen monster. 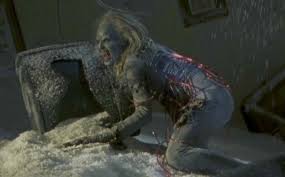 The monster thrives on cold and when she impales you with her hand, she sucks all the warmth out of you. This won't prevent babes Tori and Elaine from having a nice cat-fight over idiot Johnny. Now the Ice Queen shreds survivors and sets her sight on Tori, Elaine, other throwaway survivors. Johnny? The ugly prehistoric hag tries to seduce Johnny. It won't be as successful as Elaine. Then Johnny's boss, Audrey (Tara Walden) arrives...she announces to the creature, "It's showtime in Bitch Town!" A cat-fight ensues. Unfortunately for Audrey, a mad-scientist (Daniel Hall) is there to protect the fiend. Now the Ice Queen (Ami Chorlton) goes through avalanche survivors like crap through a goose. 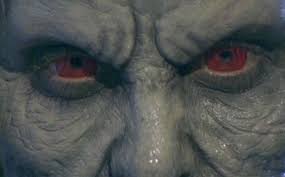 Does the large breasted law student, Elaine, have a chance in Hell to survive this film? Could pre-historic PMS have contributed to the extinction of the dinosaurs? Will Johnny take one for the team to save the babes and allow the monster to seduce him? This is a good one...really good. Sadly, Ms. Hill has not acted since 2010...too bad as she is a far superior actress than those hams Scarlett Johannson or Gal Gadot...Ms. Hill also made better films than those two pretenders. See "Ice Queen" and allow yourself to be seduced in Bitch Town by Jennifer Hill.