Blood of the Virgins, Vampires in Argentina

Okay, so the virgins in this film are probably, in reality, long past their virgin days. The babes seem more like nymphomaniacs than pillars of purity and virtue. Still, if they want to identify as virgins...fine. Fortunately, our film from Argentina, 1967's "Blood of Virgins" (directed by Emilio Vieyra) takes on the traits of some nice Euro-trash, complete with Euro-babes...I guess, here their Tango babes.

The beautiful nymphomaniac Ofelia (Susana Beltran) loves Gustavo (Walter Kliche). There is bad news...Ofelia's parents make her marry Eduardo...and furthermore, Gustavo is a vampire who doesn't like to be denied. On Eduardo's and Susana's wedding night, during marital sex, Gustavo flies in and slices up Eduardo and turns Susana into his vampire bride. Now Susana is upset, she'd rather be dead than bled. She is now doomed to wander the woods for eternity sporting a nice see through white negligee and seducing anyone who isn't Gustavo. Enter three babes and three hunks. This group breaks down in the Argentinian countryside and must bed down at a deserted mansion...supposedly haunted. Strange stuff occurs, we'll skip most of it. 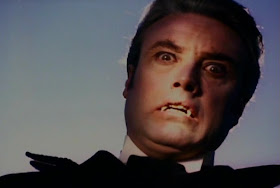 Ofelia appears to hunk Raul (Rolo Puente) and the two have passionate sex. Meanwhile, Gustavo sneaks in and bites the three babes, including Raul's girlfriend, Laura (Gloria Prat). The next day, the gals are all missing and Raul has a spring in his step. A search for the girls eventually finds them all with bite marks on their necks. Raul calls his buddy Tito (Ricardo Bauleo) to help. He'll be a huge help as Ofelia will seduce and have passionate sex with him. Meanwhile, Gustavo visits the babes in the hospital with the intent of drinking more of their blood. Ofelia desires to be killed and Gustavo desires Tango babes...somehow, this is okay in the vampire world. Now Tito and Raul must put their hormones aside and try to save the beset babes. 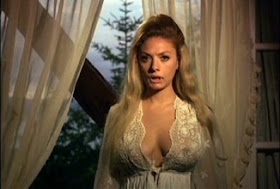