Dr. Dane (Kim Still) is one of the greatest mad-scientists ever put on the silver screen. Clad in either tight black leather, or naughty white lingerie, the sultry blonde spends all her days having wild three-way lesbian sex, infecting Czechoslovakian babes with mutant DNA, or trying to seduce the new babe/nymphomaniac marshal. Today we have a film heavy on the three-way lesbian sex in what amounts to a better film than "Alien" could have ever hoped to be. 1999's "Lethal Target" (directed by Lloyd A. Simandl), the best film ever made in The Czech Republic. 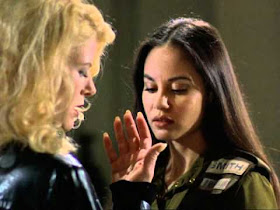 Nikki (C.C. Costigan) is a space-babe doing a life sentence on a prison mining planet. All the prisoners are sultry babes wearing rags that practically fall off their perfect bodies. A mysterious guy, Max (David Fisher) comes to see her with an offer she can't refuse. Freedom in return for completing a suicide mission. Nikki accepts and is given an undercover identity, a nymphomaniac marshal. Really! Her job is to go onto a research vessel run by Dr. Dane. Dane is doing experiments and may have mastered teleportation to alien worlds. Max fears something came back with her from an alien world which threatens to infect the universe. 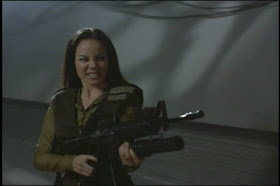 Dane is a busy gal. Wild three-way lesbian sex is her priority with Euro-babes. These scenes are steamy. She is not happy at having a new marshal assigned to her vessel. Nikki prowls around and meets a supposed ally, the hunk Pike (Josh Barker). They will have a lot of pre-marital sex while Dane watches on video, while she has wild lesbian sex with her babes. Oh yeah...during lesbian sex, Dane infects the Euro-babes with DNA which causes a slimy and toothy monster to explode out of their abdomen within 24 hours. Now monsters also prowl this vessel. Nikki is ordered to...well, you'll see. Our babe protagonist realizes the only way to get close enough to the evil Dane is to seduce her. Beware, Dane wants to infect Nikki and knows the only way to get close enough to her is to seduce her. Talk about a perfect plot! 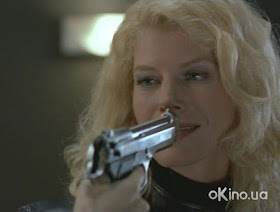