Sultry spacebabes wearing practically nothing...often naked...often strung up for torture...and subject to the groping and advances of lesbian guards and a demented she-devil warden...yes, the feel good movie of the 20th century, 1986's "Star Slammer" (directed by Fred Olen Ray). The cat-fighting will be over-the-top, and the little bit of clothes worn by these centerfold-type actresses will be easily ripped off...pure trash! Pure trash or not, "Star Slammer" is a film that speaks to us and reminds us guys...well...it reminds us guys, why we are guys! 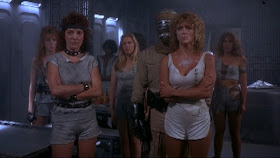 The scantily clad, and very sultry Taura (Sandy Brooke) is jiggling through a mining planet when she is captured by the evil Bantor (Ross Hagen). He frames her for murders he committed and delivers her to a prison spaceship for sultry and sweaty babes. Immediately Taura gets into a vicious cat-fight with the unofficial leader of the inmates, the sultry Mike (Suzy Stokey). They'll pummel each other and earn each other's respect. Next the dominatrix warden (Marya Gant) summons her and informs her that she will either be her sex-toy or face torture. Taura chooses torture. After more cat-fighting, Taura and Mike end up in solitary and at the mercy of mutant monster rats. 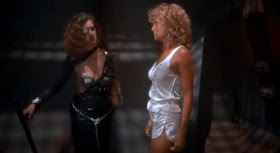 Mike and Taura join forces and together, with the other babe inmates, plot escape. As the warden whips them, an interesting plot device appears, Dr. Po (Jade Barrett). Po is a sultry Asian mad-scientist who has perfected a non-surgical lobotomy. As Bantor returns to the spaceship jail, he uses Po to inflict carnage onto the beautiful inmates. Now its time to rise-up, or face Po's brain surgery. Ah, but wait...the sultry Asian mad scientist may be facing a tortuous and humiliating fate at the hands of...well, you'll see. As spacebabes are slaughtered, Mike and Taura must lead the mutiny on the spaceship and gain freedom before Bantor and the warden torture and pick them apart.