Amphibian Man, Why the USSR Lost the Cold War

Forget about the intellectual fools who chronicle the Cold War that held our planet hostage after World War 2. The answer to the important question of "Why did the Soviet Union lose the Cold War?" is answered here. All you have to know is that the U.S. gave the world "Creature From the Black Lagoon" and the USSR gave the world..."Amphibian Man." Hence today we take a look at a film from the USSR, 1962's "Amphibian Man," shot in The Ukraine and directed by Vladimir Chebotaryov and Gennadiy Kazanskiy. Of course, it didn't hurt that we had Julie Adams and her white swimsuit, and the USSR could only respond with Anastasiya Vertinskaya...a good try...but not good enough. 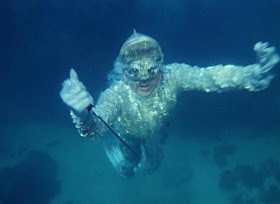 Okay, in a fishing village, I guess on the Black Sea, a so-called sea devil (Vladimir Korenev) apparently terrorizes fisherman. The supposed sea creature is actually Ichtyandr, the son of a mad-scientist. The mad-scientist, Dr. Salvator (Nikolai Simonov), in order to cure his son of disease, transplanted shark gills on him so he could live in the water. Now Ichtyandr frolics in the sea and plays with fishes. Uh oh, on a fishing ship, the evil Pedro (Mikhail Kozakov) seeks to marry the nubile and sweet Guittere (Vertinskaya). She despises him and tries to escape by jumping overboard. When a shark keys in on her, she passes out and sinks. 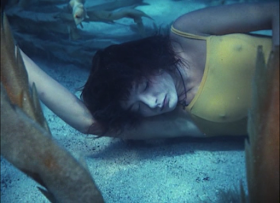 The beautiful Guittere is saved by Ichtyandr, who also kills the shark. Pedro will claim credit for saving her when she awakes and now Guittere feels obligated to marry him. Uh oh...Ichtyandr is in love and comes on land to meet the babe. Pedro schemes to capture Ichtyandr and enslave him in his service. Now Pedro desires to get our amphibian man out of the way because Guittere is in love with him. As angry fisherman take to the sea with nets, Ichtyandr faces much peril in pursuit of the nubile beauty. Uh oh for our amphibian man, he will be willing to die for the woman he loves and many of the fisherman in the village would be eager to see that happen. 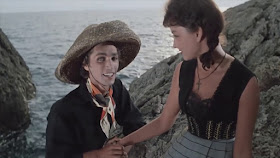 Will the amphibian man outsmart the fiendish Pedro and end up with the only babe in the entire Soviet Union? Is Pedro a mere metaphor for greedy imperialists who laugh as they sit on the backs of the workers? Would it have changed world history if "Amphibian Man" wasn't such a pale comparison to "Creature From the Black Lagoon," and fashion trends in the USSR could have matched the white swimsuit of Julie Adams? For an enjoyable Soviet sea creature fable with some nice Soviet cheesecake (I bet you didn't know that existed), see "Amphibian Man."
Christopher Zisi at 4:53 AM
Share